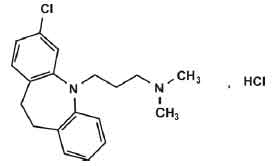 ACTIONS :
Clomipramine is a tricyclic antidepressant and its pharmacological action includes alpha-adrenolytic, anticholinergic, anti-histaminic and 5-HT receptor blocking properties. The therapeutic activity of Clomipramine Tablets is thought to be based on its ability to inhibit the neuronal re-uptake of noradrenaline and 5-HT. Inhibition of the latter is the dominant component.

Distribution :
Clomipramine is 97.6 % bound to plasma proteins. The apparent volume of distribution is about 12-17 L/kg bodyweight. Concentrations in cerebrospinal fluid are about 2 % of the plasma concentration.

Characteristics in patients :
In elderly patients, plasma clomipramine concentrations may be higher for a given dose than would be expected in younger patients because of reduced metabolic clearance. The effects of hepatic and renal impairment on the pharmacokinetics of clomipramine have not been determined.

Administration :
For oral use.

CONTRAINDICATIONS :
Known hypersensitivity to clomipramine, or any of the excipients or cross-sensitivity to tricyclic antidepressants of the dibenzazepine group. Recent myocardial infarction. Any degree of heart block or other cardiac arrhythmias. Mania, severe liver disease, narrow angle glaucoma. Retention of urine. Anafranil should not be given in combination or within 3 weeks before or after treatment with a MAO inhibitor. The concomitant treatment with selective, reversible MAO-A inhibitors, such as moclobamide, is also contra-indicated.

WARNINGS :
This medicine should at all times be kept out of reach of children, as relatively small overdoses may be fatal to them. Caution should be exercised when prescribing tricyclic antidepressants in patients with cardiovascular insufficiency, atrioventricular block (grades I to III) and arrhythmias. narrow-angle glaucoma. disorders of micturition due to an impeded flow of urine (e.g. in diseases of the prostate). a low convulsions threshold (e.g. due to brain damage of varying aetiology, epilepsy, alcoholism). severe hepatic or renal disease. tumours of the adrenal medulla (e.g. phaeochromocytoma, neuroblastoma) in whom the medicine may provoke hypotensive crises Simultaneous treatment of patients with tricyclic antidepressants and electroconvulsive therapy should only be resorted to under careful
supervision.

PRECAUTIONS :
Clomipramine hydrochloride should be administered with caution in patients with urinary retention, prostatic hypertrophy or constipation or in patients with increased intraocular pressure due to its anticholinergic properties. Tricyclic antidepressants are known to lower the convulsive threshold and clomipramine should, therefore, be used with extreme caution in patients with a history of convulsive disorders and other predisposing factors, e.g. brain damage of varying etiology, alcoholism and concomitant use with other medicines that lower the seizure threshold. Clomipramine hydrochloride should be  administered with extreme caution to patients with a history of cardiovascular disease. Caution should be observed in prescribing Clomipramine in hyperthyroid patients or in patients receiving thyroid medication cojointly. Depressed patients with suicidal tendencies should be carefully supervised during treatment. Elderly patients and young children can be particularly sensitive to the side-effects and a reduced dose, especially initially, should be employed. Blood sugar concentrations may be altered in diabetics.

Paediatric use:
Not recommended for children < 10 yrs.

EFFECTS  ON  ABILITY  TO  DRIVE  AND  USE  MACHINES :
Patients receiving Clomipramine should be warned that blurred vision, drowsiness and other CNS symptoms may occur in which case they should not drive, operate machinery or do anything else which may require alertness or quick actions. Patients should also be warned that consumption of alcohol or other drugs may potentiate these effects.

OVERDOSAGE :
The signs and symptoms of overdose with Clomipramine Tablets are similar to those reported with other tricyclic antidepressants. Cardiac abnormalities and neurological disturbances are the main complications. In children accidental ingestion of any amount should be regarded as serious and potentially fatal.

TREATMENT  OF  OVERDOSAGE :
There is no specific antidote, and treatment is essentially symptomatic and supportive. Anyone suspected of receiving an overdose of Clomipramine Tablets, particularly children, should be hospitalised and kept under close surveillance for at least 72 hours.  Perform gastric lavage or induce vomiting as soon as possible if the patient is alert. If the patient has impaired consciousness, secure the airway with a cuffed endotracheal tube before beginning lavage, and do not induce vomiting. These measures are recommended for up to 12 hours or even longer after the overdose, since the anticholinergic effect of the drug may delay gastric emptying. Administration of activated charcoal may help to reduce drug absorption. Treatment of symptoms is based on modern methods of intensive care, with continuous monitoring of cardiac function, blood gases, and electrolytes and, if necessary, emergency measures such as : anticonvulsive therapy,  artificial respiration,  insertion of a temporary cardiac pacemaker,  plasma expander, dopamine or dobutamine  ministered by intravenous drip, resuscitation.

Treatment of Torsade de Pointes.
If Torsade de Pointes should occur during treatment with Clomipramine Tablets, the drug should be discontinued and hypoxia, electrolyte abnormalities and acid base disturbances should be corrected. Persistent Torsade de Pointes may be treated with magnesium sulphate 2 g (20 ml of 10 % solution) intravenously over 30-120 seconds, repeated twice at intervals of 5-15 minutes if necessary. Alternatively, if these measures fail, the arrhythmia may be abolished by increasing the underlying heart rate. This can be achieved by atrial and ventricular pacing or by isoprenaline (isproterenol) infusion to achieve a heart rate of 90-110 beats/minute. Torsade de Pointes is usually not helped by antiarrhythmic drugs and those which prolong the QTc interval (e.g. amiodarone, quinidine) may make it worse.
Since it has been reported that physostigmine may cause severe bradycardia, asystole and seizures, its use is not recommended in cases of overdosage with Clomipramine Tablets. Haemodialysis or peritoneal dialysis are ineffective because of the low plasma concentrations of clomipramine.

STORAGE :
Store below 30°C (86°F). protected from moisture and light.
Do not refrigerate.