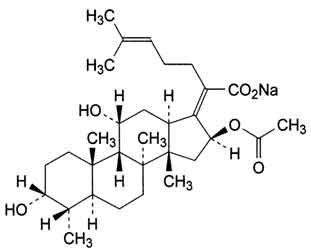 ACTIONS :
Fusidic acid is a potent antibiotic derived from the fungus Fusidium coccineum. Its mode of action is by inhibition of protein synthesis by the prevention of translocation on the ribosome. Concentrations adequate for bactericidal activity against staphylococci have been demonstrated in the following : pus, exudate, soft tissue, bone tissue, synovial fluid, aqueous humour, vitreous body, burn crusts, intracranial abscess, sputum, serum. Fusidic acid is structurally related to cephalosporin P and helvolic acid, neither of which has been developed for clinical use. SODIUM  FUSIDATE  FOR  INJECTION exerts antibacterial activity against most Gram-positive organisms; in particular, it is effective against pathogenic staphylococci, including penicillinase producing and methicillin-resistant strains. The MICs for most Staph aureus strains are between 0.02-0.12 mg/l. It is much less active against S. pyogenes with the MIC between  4-20 mg/l. It has slight or no activity against Gram-negative organisms and fungi.

Both oral and intravenous Sodium Fusidate have been given in combination with other antibiotics, e.g. cloxacillin, cephaloridine, ampicillin, methicillin, erythromycin, novobiocin, rifampicin. Such a combination may prevent the development of Sodium Fusidate resistant strains. No cross-resistance occurs between Sodium Fusidate and any other antibiotic in clinical use. Because it is predominantly effective against Gram-positive organisms, disturbance of the normal gastrointestinal flora is unlikely.

PHARMACOKINETICS :
500 mg of sodium fusidate given as a single infusion over 2 hours results in a Cmax of 52 micrograms/ml. Blood levels are cumulative, reaching concentrations of  60-120 micrograms/ml after repeated infusion of 500 mg sodium fusidate every 8 hours for 2-3 days. The plasma half-life is approximately 10-15 hours. Fusidic acid is extensively excreted in the bile; 0.3 % is present as the unmetabolized drug, 15 % is the glucuronide conjugate, 10 % is the dicarboxylic metabolite and 3 % is the hydroxy metabolite. Fusidic acid is excreted 20 % in the faeces.

INDICATIONS :
This product is indicated in the treatment of all staphylococcal infections due to susceptible organisms such as :Osteomyelitis, pneumonia, septicaemia, wound infections, endocarditis, superinfected cystic fibrosis, cutaneous infections. It should be administered intravenously whenever oral therapy is inappropriate, which includes cases where absorption from the gastro-intestinal tract is unpredictable. If bacteriological diagnosis reveals methicillin-resistant Staphylococcus aureus, the use of SODIUM  FUSIDATE  FOR INJECTION monotherapy is not appropriate and concurrent treatment with other anti-staphylococcal antibiotics is necessary.

Administration :
FOR  INTRAVENOUS  INFUSION  AFTER  DILUTION.

Sodium fusidate displaces bilirubin from its albumin binding site in vitro. Caution is necessary if this product is administered to patients with impaired transport and metabolism of bilirubin. The use of this product in combination with drugs that are CYP-3A4 biotransformed should be avoided. Bacterial resistance has been reported to occur with the use of sodium fusidate. As with all antibiotics, extended or recurrent use may increase the risk of developing antibiotic resistance. This medicinal product contains 3.2 mmol (73 mg) sodium per 500 mg dose. This should be taken into consideration by patients on a controlled sodium diet.

Pregnancy : Category C
Fusidic acid may cause kernicterus in babies during the first month of life by displacing bilirubin from plasma albumin. Fusidic acid should be avoided when possible during the last month of pregnancy.

Nursing mothers :
Safety in lactation has not been established. There is evidence that the drug can penetrate the placental barrier and is detectable in human milk. Caution is therefore required when SODIUM  FUSIDATE  FOR  INJECTION is used in mothers who wish to breast feed.

Paediatric Use :
SODIUM  FUSIDATE  FOR  INJECTION has been given to neonates from the day of birth and for periods of up to one year without adverse effects. Despite the immature enzyme system in the neonate, none of the children showed any evidence of hepatotoxicity, nor did they develop renal, blood, ocular or other toxicity.

INTERACTIONS  AND  INCOMPATIBILITIES :
Interactions  :
The risk of myopathy including rhabdomyolysis may be increased by the concomitant administration of systemic SODIUM  FUSIDATE  FOR  INJECTION with statins. Co administration of this combination may cause increased plasma concentrations of both agents. The mechanism of this interaction (whether it is pharmacodynamics or pharmacokinetic, or both) is yet unknown. There have been reports of rhabdomyolysis (including some fatalities) in patients receiving this combination. If treatment with SODIUM  FUSIDATE  FOR  INJECTION is necessary, statin treatment should be discontinued throughout the duration of the SODIUM  FUSIDATE  FOR  INJECTION treatment. In vitro compatibility studies of Sodium Fusidate  500 mg for Intravenous Infusion with commonly used infusion solutions have been carried out. The results showed that sodium fusidate reconstituted at 50 mg/ml in buffer solution is physically and chemically compatible for at least 24 hours at room temperature with the following infusion solutions (the figure in parenthesis shows the concentration of sodium fusidate in the final admixture) :

Incompatibilities  :
Sodium fusidate reconstituted at 50 mg/ml in buffer solution is physically incompatible with infusion fluids containing 20 % or more of dextrose, lipid infusions and peritoneal dialysis fluids. Precipitation may occur at dilutions which result in a pH of less than 7.4.

SIDE  EFFECTS :
Based on clinical trial data on sodium fusidate administered intravenously, in high doses and concomitantly with other antibiotics in critically ill patients, it is estimated that approximately 30 % of the patients may experience an undesirable effect. This number is reduced when the product is administered through a central vein. Venous intolerance such as venous spasm and thrombophlebitis are very common when the product is administered through a peripheral vein, while common when it is administered through a central line. Raised bilirubin, liver enzymes and clinical jaundice are considered to be common. These undesirable effects are usually reversible on discontinuation of the drug. Side effects are listed below, by MedDRA System Organ Class, in decreasing order of frequency within each class. Where frequencies are given, these are based on the clinical trial data, using the stated frequency classification. Where the term ‘Not known’ is given, these effects are derived from spontaneous reports.

OVERDOSAGE :
The following effects have been selected on the basis of their potential clinical significance (possible signs and symptoms in parentheses where appropriate)-not necessarily inclusive :

TREATMENT  OF  OVERDOSAGE :
Monitoring :
Excessive intravenous doses of fusidic acid may result in hypocalcaemia due to the amount of phosphate buffer administered (each 10 millilitres of phosphate/citrate buffer for intravenous infusion contains 196 milligrams disodium hydrogen phosphate equivalent to 1.1 millimols of phosphate) Patient monitoring including serum calcium determinations and possible treatments may be required with intravenous overdoses of fusidic acid. Patients in whom intentional overdose is confirmed or suspected should be referred for psychiatric consultation.

STORAGE :
Store below 25° C (77°F), protected from moisture and light.
Do not refrigerate.
The sodium fusidate dry powder is stable for 2 years when stored at room temperature (below 25°C) and protected from light. When the buffer solution is transferred to the powder vial, this vial should be regarded as a unit dose. The required amount of the sodium fusidate/buffer solution should be used once only and any unused portion discarded.

PRESENTATION :
SODIUM  FUSIDATE  FOR  INJECTION is supplied as :