SERPINE (Reserpine) is an alkaloid obtained from the roots of certain species of Rauwolfia (Apocynaceae), mainly Rauwolfia serpentina and R. vomitoria or by synthesis. Chemically Reserpine is Yohimban- 16- carboxylic acid, 11,17-dimethoxy-18-[(3,4,5-trimethoxybenzoyl)oxy]-methyl ester. The molecular formula is C33H40N2O9 and the molecular weight is 608.68. 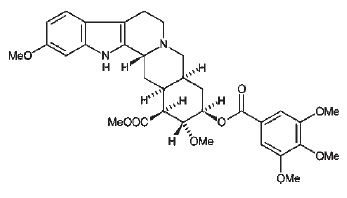 SERPINE Tablet is white, round, beveled, scored and debossed with PRP on one side.

ACTIONS :
Reserpine acts centrally to produce characteristic sedation and tranquillisation; it also produces a generalised increase in parasympathetic activity and a depression of responses to peripheral adrenergic nerve activity. It causes a slowly developing fall in blood pressure, associated with bradycardia, which appears to involve both increased vagal and decreased sympathetic effects. Patients with chronic mental illness treated with Reserpine become relaxed, sociable and co-operative.

INDICATIONS :
Reserpine is recommended for the treatment of hypertension. mild anxiety states and chronic psychoses such as schizophrenia. In severe hypertension or long established cases of hypertension, Reserpine may be used together with more potent hypertensives (allowing them to be used in smaller doses) and in which case, the Reserpine enhances the reaction to bring about the desired relief within a short time. Reserpine has  a calming effect in chronic psychoses involving anxiety. psychomotor hyperactivity or aggressive behaviour. Patients vary in their response to Reserpine and dosage must be adjusted to individual requirements.

In hypertension, SERPINE Tablet is given by mouth in an initial dose of up to 500 µg daily for about 2 weeks, subsequently reduced to the lowest dose necessary to maintain the response; some sources have recommended an initial dose of 100 µg.  A maintenance dose of about 250 µg daily is usually adequate and 500 µg should not normally be exceeded.  To reduce side-effects and tolerance smaller doses of SERPINE Tablet may be given in conjunction with a thiazide diuretic. SERPINE Tablet has been used in chronic psychoses in daily doses of up to 1 mg to 5 mg.

CONTRAINDICATIONS :
SERPINE Tablet should not be administered to patients with pre-existing evidence of depression, and should be discontinued if symptoms or signs suggestive thereof develop.

FDA Pregnancy Category C. Reserpine crosses the placenta. Adequate and well-controlled studies have not been done in humans. However, possible adverse effects in infants of mothers who received Reserpine include increased respiratory secretions, nasal congestion, cyanosis and anorexia. Reserpine was found to be teratogenic in rats given parenteral doses of up to 2 mg per kg of body weight (mg/kg) and was embryocidal in guinea pigs given parenteral doses of 0.5 mg per day.

Breast-feeding :
Problems in humans have not been documented. However, Reserpine is distributed into breast milk. Possible adverse effects in infants of mothers who received Reserpine include increased respiratory secretions, nasal congestion, cyanosis, and anorexia.

Paediatrics :
Appropriate studies on the relationship of age to the effects of the Reserpine have not been performed in the paediatric population. However, paediatrics-specific problems that would limit the usefulness of these medications in children are not expected.

Geriatrics :
Although appropriate studies on the relationship of age to the effects of the Reserpine have not been performed in the geriatric population, the elderly may be more sensitive to the CNS depressant and hypotensive effects. In addition, elderly patients are more likely to have age-related renal function impairment, which may require caution in patients receiving Reserpine. A lower dose is recommended in the elderly.

Dental :
Use of Reserpine may decrease or inhibit salivary flow, thus contributing to the development of caries, periodontal disease, oral candidiasis, and discomfort.

PRECAUTIONS :
Reserpine should not be used in patients with depression or a history of depression, with active peptic ulcer, or ulcerative colitis, and in patients with Parkinsons disease.  It should also be avoided in phaeochromocytoma. It should be used with caution in debilitated or elderly patients, and in the presence of cardiac arrhythmias, myocardial infarction, renal insufficiency, gallstones, epilepsy, or allergic conditions such as bronchial asthma. If used in patients requiring electroconvulsive therapy an interval of at least 7 to 14 days should be allowed to elapse between the last dose of Reserpine and the commencement of the shock treatment. It is probably not necessary to discontinue treatment with Reserpine during anaesthesia, although the effects of CNS depressants may be enhanced by Reserpine.

INTERACTIONS :
Patients taking Reserpine may be hypersensitive to adrenaline and other direct-acting sympathomimetics which should not be given except to antagonise Reserpine. The effects of indirect-acting sympatho-mimetics such as ephedrine may be decreased by Reserpine. The hypotensive effects of Reserpine are enhanced by thiazide diuretics and other anti-hypertensives. Reserpine may cause excitation and hypertension in patients receiving MAOIs. Concurrent administration of digitalis or quinidine may cause cardiac arrhythmias. Reserpine may enhance the effect of CNS depressants.

OVERDOSAGES  AND  TREATMENT  OF  OVERDOSE :
Flushing, insomnia, bradycardia, severe mental depression and Parkinson like syndrome. Respiration may be affected, with death ultimately resulting from central respiratory depression. If the patient is not in a coma, emesis should be induced or the stomach emptied by aspiration and lavage. Atropine sulphate may be used to relieve parasympathomimetic side-effects such as nasal congestion. Signs of motor dysfunction e.g. tremors, stiffness may be treated with benzhexol or other anti-Parkinsonism agents. Respiration may have to be assisted.