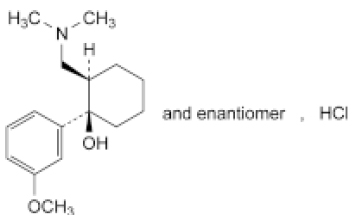 ACTIONS :
Tramadol is a centrally acting opioid analgesic. It is a non-selective pure agonist at μ, δ and k opioid receptors with a higher affinity for the μ receptor. Other mechanisms which contribute to its analgesic effect are inhibition of neuronal reuptake of noradrenaline and enhancement of serotonin release. Tramadol has an antitussive effect. In contrast to morphine, analgesic doses of tramadol over a wide range have no respiratory depressant effect. Also gastrointestinal motility is less affected. Effects on the cardiovascular system tend to be slight. The potency of tramadol is reported to be 1/10 (one tenth) to 1/6 (one sixth) that of morphine.

INDICATIONS :
TRAMADOL HYDROCHLORIDE INJECTION is indicated for the treatment of moderate to severe acute pain for a period not exceeding 5 days.

Administration :
TRAMADOL HYDROCHLORIDE INJECTION is for parenteral injection either intramuscularly, by slow intravenous injection (over 2 to 3 minutes) or diluted in solution for administration by infusion or patient controlled analgesia.

Dilution :
For instructions on dilution of the medicinal product before administration :
TRAMADOL HYDROCHLORIDE INJECTION is physically and chemically compatible for up to 24 hours with 4.2 % sodium bicarbonate and Ringer’s solution and for up to 5 days with the following infusion solutions : 0.9 % sodium chloride, 0.18 % sodium chloride and 4 % glucose, sodium lactate compound, 5 % glucose and haemaccel.

Duration of administration :
Tramadol should under no circumstances be administered for longer than absolutely necessary. If long-term pain treatment with tramadol is necessary in view of the nature and severity of the illness, then careful and regular monitoring should be carried out (if necessary with breaks in treatment) to establish whether and to what extent further treatment is necessary.

Dosage :
Adults and children aged 12 years and over :
Parenteral administration :
The usual dose is 50 or 100 mg, 4 - 6 hourly, by intravenous or intramuscular route. Dosage should be adjusted according to pain severity and response. Intravenous injection must be given slowly over 2 - 3 minutes. For post-operative pain, administer an initial bolus of
100 mg. During the 60 minutes following the initial bolus, further doses of 50 mg may be given every 10 - 20 minutes, up to a total dose of 250 mg including the initial bolus. Subsequent dosage should be 50 mg or 100 mg, 4 to 6 hourly up to a total daily dose of 600 mg.

Elderly :
The usual dosage may be used although it should be noted that in very old patients (> 75 years old), the elimination half-life of tramadol was reported to be increased by 17 % following oral administration.

Renal impairment/renal dialysis :
The elimination of tramadol may be prolonged. The usual initial dosage should be used. For patients with creatinine clearance < 30 ml/min, the dosage interval should be increased to 12 hours. Tramadol is not recommended for patients with severe renal impairment (creatinine clearance < 10 ml/min). As tramadol only removed very slowly by haemodialysis or haemofiltration, post-dialysis administration to maintain analgesia is not usually necessary.

Children under 12 years :
Not recommended.

WARNINGS :
At therapeutic doses, tramadol has the potential to cause withdrawal symptoms. Rarely, cases of dependence and abuse have been reported. At therapeutic doses withdrawal symptoms have been reported at a frequency of 1 in 8,000. Reports of dependence and abuse have been less frequent. Because of this potential the clinical need for continued analgesic treatment should be reviewed regularly. Tramadol has a low dependence potential. On long term use tolerance, psychic and physical dependence may develop. In patients with a tendency to drug abuse or dependence, treatment should be for short periods and under strict medical supervision. TRAMADOL HYDROCHLORIDE INJECTION is not a suitable substitute in opioid-dependent patients. The product does not suppress morphine withdrawal symptoms although it is an opioid agonist.

PRECAUTIONS :
TRAMADOL HYDROCHLORIDE INJECTION should be used with caution in opioid-dependent patients, patients with head injury, a reduced level of consciousness of uncertain origin, disorders of the respiratory centre or function, increased intracranial pressure, severe impairment of hepatic and renal function and in patients prone to convulsive disorders or in shock. In patients sensitive to opiates the product should only be used with caution. Convulsions have been reported at therapeutic doses and the risk may be increased at doses exceeding the usual upper daily dose limit. Patients with a history of epilepsy or those susceptible to seizures should only be treated with tramadol if there are compelling reasons. The risk of convulsions may increase in patients taking tramadol and concomitant medication that can lower the seizure threshold. Care should be taken when treating patients with respiratory depression, or if concomitant CNS depressant drugs are being administered, or if the recommended dosage is significantly exceeded, as the possibility of respiratory depression cannot be excluded in these situations. At therapeutic doses respiratory depression has infrequently been reported. In one study using a nitrous oxide/opioid (tramadol) anaesthetic technique (with only intermittent administration of enflurane ‘as required’) tramadol was reported to enhance intra-operative recall. Hence its use during potentially very light planes of general anaesthesia should be avoided. Two studies of tramadol administration during anaesthesia comprising continuous administration of isoflurane have shown clinically significant lightening of anaesthetic depth or intra-operative recall. Therefore providing the current practice of administering continuous, potent (volatile or intravenous) anaesthetic agent is followed, tramadol may be used intra-operatively in the same way as other analgesic agents are routinely used. This medicinal product contains approximately 8.29 mg sodium acetate trihydrate (1.4 mg sodium) per 2 ml dose.

Pregnancy : Category C
Animal studies with tramadol at very high doses have revealed effects on organ development, ossification and neonatal mortality. Teratogenic effects were not observed. Tramadol crosses the placenta. There is inadequate evidence available on the safety of tramadol in human pregnancy, therefore TRAMADOL HYDROCHLORIDE INJECTION should not be used in pregnant women. Tramadol - administered before or during birth - does not affect uterine contractility. In neonates it may induce changes in the respiratory rate which are usually not clinically relevant. Chronic use during pregnancy may lead to neonatal withdrawal symptoms.

Nursing mothers :
Tramadol and its metabolites are found in small amounts in human breast milk. An infant could ingest 0.1 % of the dose given to the mother. TRAMADOL HYDROCHLORIDE INJECTION should not be administered during breast-feeding. After a single administration of tramadol however, it is not usually necessary to interrupt breast feeding.

Paediatric use :
TRAMADOL HYDROCHLORIDE INJECTION is not recommended for children below the age of 12 years.

EFFECTS ON ABILITY TO DRIVE AND USE MACHINES :
TRAMADOL HYDROCHLORIDE INJECTION may cause somnolence and dizziness and this effects may be potentiated by alcohol and other CNS depressants. Ambulant patients should be warned not to drive or operate machinery if affected. Size : 10.75”x 8.5”, Lang : English, Color : Black, Fold : 4, Print : Front & Back. TRAMADOL HYDROCHLORIDE INJECTION For the use of a Registered Medical Practitioner or a Hospital or a Institution only.

INTERACTIONS :
Use with CNS depressants :
TRAMADOL HYDROCHLORIDE INJECTION should be used with caution and in reduced dosages when administered to patients receiving CNS depressants such as alcohol, opioids, anaesthetic agents, phenothiazines, tranquillisers or sedative hypnotics. The combination of tramadol with mixed opiate agonists/antagonists (eg. buprenorphine, pentazocine) is not advisable because the analgesic effect of a pure agonist may be theoretically reduced in such circumstances.

Use with other serotonergic agents :
The presence of another drug that increases serotonin by any mechanism should alert the treating physician to the possibility of an interaction. Concomitant therapeutic use of tramadol and serotonergic medicines such as selective serotonin reuptake inhibitors (SSRIs), serotonin-norepinephrine reuptake inhibitors (SNRIs), MAO inhibitors, tricyclic antidepressants and mirtazapine may cause serotonin toxicity. Serotonin syndrome is likely when one of the following is observed :

Withdrawal of the serotonergic medicines usually brings about a rapid improvement. Drug treatment depends on the nature and severity of the symptoms.

Use with MAO inhibitors :
TRAMADOL HYDROCHLORIDE INJECTION should not be used in patients who are taking MAO inhibitors or who have taken them within the last fourteen days, as tramadol inhibits the uptake of noradrenaline and serotonin.

Other interactions :
Tramadol does not appear to induce its own metabolism in humans, since observed maximal plasma concentrations after multiple oral doses are higher than expected based on single-dose data. Tramadol is a mild inducer of selected drug metabolism pathways measured in animals. Concomitant administration of tramadol with carbamazepine causes a significant increase in tramadol metabolism, presumably through metabolic induction by carbamazepine. Patients receiving chronic carbamazepine doses of up to 800 mg daily may require up to twice the recommended dose of tramadol. Tramadol is metabolised to M1 by the CYP2D6 P450 isoenzyme. Drugs that selectively inhibit that isoenzyme (quinidine, phenothiazines, antipsychotic agents) may cause increased concentrations of tramadol and decreased concentrations of M1. The clinical consequences of these potential effects have not been fully investigated. Concomitant administration of tramadol with cimetidine does not result in clinically significant changes in tramadol pharmacokinetics. Therefore no alteration of the tramadol dosage regimen is recommended. Other drugs known to inhibit the CYP3A4 isoenzyme of cytochrome P450, such as ketoconazole and erythromycin, may inhibit the metabolism of tramadol (via N-demethylation) and probably the metabolism of the active O-demethylated metabolite (M1). The clinical importance of such an interaction has not been studied. In a limited number of studies, the pre- or post-operative application of the antiemetic 5-HT3 antagonist ondansetron increased the requirement of tramadol in patients with postoperative pain.

SIDE EFFECTS :
Following side effects have been reported following administration of TRAMADOL HYDROCHLORIDE INJECTION :

OVERDOSAGE :
Symptoms :
In principle, on intoxication with tramadol symptoms similar to those of other centrally acting analgesics (opioids) are to be expected. These include in particular miosis, vomiting, cardiovascular collapse, consciousness disorders up to coma, convulsions and respiratory depression up to respiratory arrest.

TREATMENT OF OVERDOSAGE :
The general emergency measures apply. Keep open the respiratory tract (aspiration), maintain respiration and circulation depending on the symptoms. The antidote for respiratory depression is naloxone. In animal experiments naloxone had no effect on convulsions. In such cases diazepam should be given intravenously. In case of intoxication orally, gastrointestinal decontamination with activated charcoal or by gastric lavage is only recommended within 2 hours after tramadol intake. Gastrointestinal decontamination at a later time point may be useful in case of intoxication with exceptionally large quantities. Tramadol is minimally eliminated from the serum by haemodialysis or haemofiltration. Therefore treatment of acute intoxication with tramadol with haemodialysis or haemofiltration alone is not suitable for detoxification.

SHELF LIFE :
24 months from the date of manufacture.

PRESENTATION :
TRAMADOL HYDROCHLORIDE INJECTION is supplied as below :