ACTIONS :
Doxapram hydrochloride produces respiratory stimulation mediated through the peripheral carotid chemoreceptors. As the dosage level is increased, the central respiratory centers in the medulla are stimulated with progressive stimulation of other parts of the brain and spinal cord. The respiratory stimulant action is manifested by an increase in tidal volume associated with a slight increase in respiratory rate. A pressor response may result following doxapram administration. Provided there is no impairment of cardiac function, the pressor effect is more marked in hypovolaemic than in normovolaemic states. The pressor response is due to the improved cardiac output rather than peripheral vasoconstriction. Following doxapram administration, an increased release of catecholamines has been noted. Although opiate-induced respiratory depression is antagonized by doxapram, the analgesic effect is not affected.

PHARMACOKINETICS :
After intravenous doses doxapram is rapidly distributed into the tissues. Onset of respiratory stimulation usually occurs in 20 to 40 seconds, with a peak effect achieved in 1 to 2 minutes. Duration of effect following a single dose varies from 5 to 12 minutes. Doxapram is extensively metabolised in the liver. The major route of excretion of metabolites and a small amount of unchanged drug is thought to be via bile to the faeces. It is also excreted in the urine.

INDICATIONS :
1. Post-anaesthesia :
a. When the possibility of airway obstruction and/or hypoxia have been eliminated, doxapram may be used to stimulate respiration in patients with drug-induced post-anaesthesia respiratory depression or apnoea other than that due to muscle relaxant drugs.
b. To pharmacologically stimulate deep breathing in the so-called “stir-up” regimen in the post-operative patient. (Simultaneous administration of oxygen is desirable).

2. Drug-induced central nervous system depression :
Exercising care to prevent vomiting and aspiration, doxapram may be used to stimulate respiration, hasten arousal and to encourage the return of laryngopharyngeal reflexes in patients with mild to moderate respiratory and CNS depression due to drug overdose.

3. Chronic pulmonary disease associated with acute hypercapnia :
Doxapram is indicated as a temporary measure in hospitalized patients with acute respiratory insufficiency superimposed on chronic obstructive  pulmonary disease. Its use should be for a short period of time (approximately 2 hours) as an aid in the prevention of elevation of arterial CO2 tension during the administration of oxygen. It should not be used in conjunction with mechanical ventilation. The adequacy of ventilation must be assessed by measurements of arterial blood gases as well as careful monitoring of the cardiovascular indices.

Dosage :
Diluent Compatibility :
Doxapram hydrochloride is compatible with 5 % and 10 % dextrose in water or normal saline.

b.   By infusion :
The solution is prepared by adding 250 mg of doxapram (12.5 ml) to 250 ml of dextrose 5 % or 10 % in water or normal saline solution. The infusion is initiated at a rate of approximately 5 mg/minute until a satisfactory respiratory response is observed, and maintained at a rate of 1 to 3 mg/minute.  The rate of infusion should be adjusted to sustain the desired level of respiratory stimulation with a minimum of side effects. The recommended total dosage by infusion is 4 mg/kg (2.0 mg/lb) or approximately 300 mg for the average adult.

2. In the management drug-induced CNS depression : 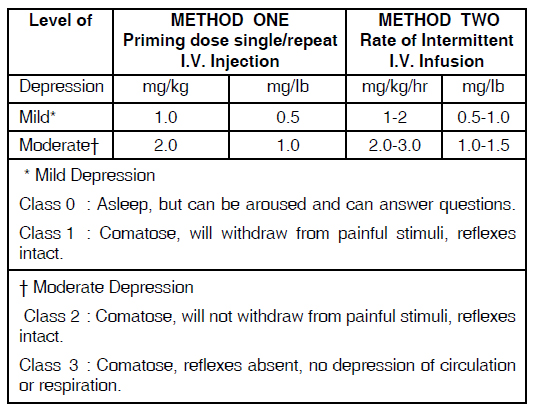 1. In Post-anaesthetic Use :
Doxapram is neither an antagonist to muscle relaxant drugs nor a specific narcotic antagonist. More specific tests (e.g. peripheral nerve stimulation, airway pressures, head lift, pulse oximetry, and end-tidal carbon dioxide) to assess adequacy of ventilation are
recommended before administering doxapram. Doxapram should be administered with great care and only under careful supervision to patients with hypermetabolic states such as hyperthyroidism or pheochromocytoma. Since narcosis may recur after stimulation with doxapram, care should be taken to maintain close observation until the patient has been fully alert for ½ to 1 hour. In patients who have received general anaesthesia utilizing a volatile agent known to sensitize the myocardium to catecholamines, administration of doxapram should be delayed until the volatile agent has been excreted in order to lessen the potential for arrhythmias, including ventricular tachycardia and ventricular fibrillation.

2. In Drug-Induced CNS and Respiratory Depression :
Doxapram alone may not stimulate adequate spontaneous breathing or provide sufficient arousal in patients who are severely depressed either due to respiratory failure or to CNS depressant drugs, but may be used as an adjunct to established supportive measures and resuscitative techniques.

3. In Chronic Obstructive Pulmonary Disease :
Because of the associated increased work of breathing, do not increase the rate of infusion of doxapram in severely ill patients in an attempt to lower pCO2.

PRECAUTIONS :
An adequate airway is essential and airway protection should be considered since doxapram may stimulate vomiting.Recommended dosages of doxapram should be employed and maximum total dosages should not be exceeded. In order to avoid side effects, it is advisable to use the minimum effective dosage. Monitoring of the blood pressure, pulse rate, and deep tendon reflexes is recommended to prevent overdosage. Vascular extravasation or use of a single injection site over an extended period should be avoided since either may lead to thrombophlebitis or local skin irritation. Rapid infusion may result in haemolysis. Lowered pCO2 induced by hyperventilation produces cerebral vasoconstriction and slowing of the cerebral circulation. This should be taken into consideration on an individual basis. In certain patients a pressor effect of doxapram on the pulmonary circulation may result in a fall of the arterial pO2 probably due to a worsening of ventilation perfusion-matching in the lungs despite an overall improvement in alveolar ventilation and a fall in pCO2. Patients should be carefully supervised taking into account available blood gas measurements.

There is a risk that doxapram will produce adverse effects (including seizures) due to general central nervous system stimulation. Muscle involvement may range from fasciculation to spasticity. Anticonvulsants such as intravenous short-acting barbiturates, along with oxygen and resuscitative equipment should be readily available to manage overdosage manifested by excessive central nervous system stimulation. Slow administration of the drug and careful observation of the patient during administration and for some time
subsequently are advisable. These precautions are to assure that the protective reflexes have been restored and to prevent possible post-hyperventilation or hypoventilation. Doxapram should be administered cautiously to patients receiving sympathomimetic or monoamine oxidase inhibiting drugs, since an additive pressor effect may occur. Blood pressure increases are generally modest but significant increases have been noted in some patients. Because of this, doxapram is not recommended for use in patients with severe hypertension Cardiovascular effects may include various dysrhythmias. Patients receiving doxapram should be monitored for disturbance of their cardiac rhythm. If sudden hypotension or dyspnea develops, doxapram should be stopped. Doxapram should be administered with caution to patients with significantly impaired hepatic or renal function as a reduction in the rate of metabolism or excretion of metabolites may alter the response.

In Post-anaesthetic Use :
The same consideration to pre-existing disease states should be exercised as in non-anaesthetized individuals. Covering use in hypertension, asthma, disturbances of respiratory mechanics including airway obstruction, CNS disorders including increased cerebrospinal fluid pressure, convulsive disorders, acute agitation, and profound metabolic disorders.

In Chronic Obstructive Pulmonary Disease :
a. Arrhythmias seen in some patients in acute respiratory failure secondary to chronic obstructive pulmonary disease are probably the result of hypoxia. Doxapram should be used with caution in these patients.
b. Arterial blood gases should be drawn prior to the initiation of doxapram infusion and oxygen administration, then at least every ½ hour during the infusion period to prevent development of CO2 retention and acidosis in patients with chronic obstructive pulmonary disease with acute hypercapnia. Doxapram administration does not diminish the need for careful monitoring of the patient or the need for supplemental oxygen in patients with acute respiratory failure. Doxapram should be stopped if the arterial blood gases deteriorate, and mechanical ventilation should be initiated.