MAINTENANCE OF PATENCY OF DUCTUS ARTERIOSUS IN NEONATES
The treatment of a haemodynamically significant patent ductus arteriosus (PDA ) in preterm newborn infants
DESCRIPTION:

IBUPROFEN  INJECTION is a non-steroidal anti-inflammatory drug (NSAID). Chemically, IBUPROFEN is (±)-2-(p-Isobutylphenyl)propionic acid. The molecular formula is C13H18O2 and molecular weight is 206.28.

ACTIONS :
Ibuprofen is a non-steroidal anti-inflammatory drug (NSAID) that possesses anti-inflammatory, analgesic and antipyretic activity. Its mode of action, like that of other NSAIDs, is not completely understood, but may be related to prostaglandin synthetase inhibition.

PHARMACOKINETICS :
Ibuprofen is a racemic mixture of [-]R- and [+]S-isomers. In vivo and in vitro studies indicate that the [+]S-isomer is responsible for clinical activity. The [-]R-form, while thought to be pharmacologically inactive, is slowly and incompletely (~60 %) interconverted into the active [+]S species in adults. The degree of interconversion in children is unknown, but is thought to be similar. The [-]R-isomer serves as a circulating reservoir to maintain levels of active drug.

The pharmacokinetic parameters of IBUPROFEN  INJECTION determined in a study with volunteers are presented below. 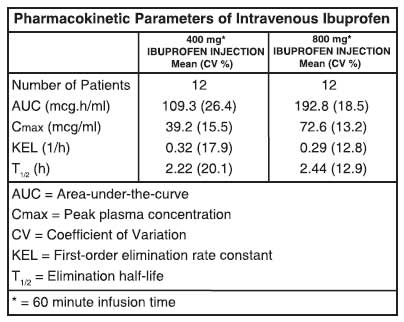 Ibuprofen, like most NSAIDs, is highly protein bound (> 99 % bound at 20 mcg/ml). Protein binding is saturable, and at concentrations > 20 mcg/ml binding is nonlinear. Based on oral dosing data, there is an age- or fever-related change in volume of distribution for ibuprofen.

Antipyretic :
IBUPROFEN  INJECTION is indicated for the reduction of fever in adults.

Use the lowest effective dose for the shortest duration consistent with individual patient treatment goals. After observing the response to initial therapy with IBUPROFEN  INJECTION, the dose and frequency should be adjusted to suit an individual patient’s needs. Do not exceed 3200 mg total daily dose. To reduce the risk of renal adverse reactions, patients must be well hydrated prior to administration of IBUPROFEN  INJECTION.

Analgesia :
Administer 400 mg to 800 mg intravenously every 6 hours as necessary. Infusion time must be no less than 30 minutes.

Diluted solutions are stable for up to 24 hours at ambient temperature (approximately 20 to 25°C) and room lighting. Infusion time must be not less than 30 minutes.

Asthma and Allergic Reactions :
IBUPROFEN  INJECTION is contraindicated in patients who have experienced asthma, urticaria, or allergic-type reactions after taking aspirin or other NSAIDs. Severe, rarely fatal anaphylactic-like reactions to NSAIDs have been reported in such patients.

Labor and Delivery :
The effects of IBUPROFEN  INJECTION on labor and delivery in pregnant women are unknown. In rat studies, maternal exposure to NSAIDs, as with other drugs known to inhibit prostaglandin synthesis, increased the incidence of dystocia and delayed parturition, and decreased pup survival.

Nursing mothers :
It is not known whether this drug is excreted in human milk. Because many drugs are excreted in human milk and because of the potential for serious adverse reactions in nursing infants from IBUPROFEN  INJECTION, a decision should be made whether to discontinue nursing or discontinue the drug, taking into account the importance of the drug to the mother.

Paediatric Use :
Safety and effectiveness of IBUPROFEN  INJECTION for management of pain and reduction of fever has not been established in paediatric patients below the age of 17 years.

Geriatric Use :
Clinical studies of IBUPROFEN  INJECTION did not include sufficient numbers of subjects aged 65 and over to determine whether they respond differently from younger subjects. Dose selection for an elderly patient should be cautious, usually starting at the low end of the dosing range, reflecting the greater frequency of decreased hepatic, renal, or cardiac function, and of concomitant disease or other drug therapy. Elderly patients are at increased risk for serious GI adverse events.

INTERACTIONS  AND  INCOMPATIBILITIES :
Aspirin :
When ibuprofen is administered with aspirin, ibuprofen’s protein binding is reduced, although the clearance of free ibuprofen is not altered. The clinical significance of this interaction is not known; however, as with other NSAIDs, concomitant administration of IBUPROFEN INJECTION and aspirin is not generally recommended because of the potential for increased adverse effects.

Anticoagulants :
The effects of warfarin and NSAIDs on GI bleeding are synergistic, such that the users of both drugs together have a higher risk of serious GI bleeding than users of either drug alone.

ACE Inhibitors :
NSAIDs may diminish the antihypertensive effect of ACE inhibitors. This interaction should be given consideration in patients taking NSAIDs concomitantly with ACE inhibitors.

Diuretics :
Clinical studies and post-marketing observations have shown that ibuprofen can reduce the natriuretic effects of furosemide and thiazides in some patients. This response has been attributed to inhibition of renal prostaglandin synthesis. During concomitant therapy with NSAIDs, observe patients closely for signs of renal failure, as well as to assure diuretic efficacy.