BLOCKASOL (Heparin) is a heterogenous group of straight-chain anionic mucopolysaccharides, called  glycosaminoglycans having anticoagulant properties. Although others may be present, the main sugars occurring in heparin are : (1) α-L-iduronic acid 2-sulfate, (2) 2-deoxy-2-sulfamino-α-D-glucose 6-sulfate, (3) β-D-glucuronic acid, (4) 2-acetamido-2-deoxy-α-D-glucose, and (5) α-L-iduronic acid. These sugars are present in decreasing amounts, usually in the order (2) > (1) > (4) > (3) > (5), and are joined by glycosidic linkages, forming polymers of varying sizes.

ACTIONS :
Heparin inhibits reactions that lead to the clotting of blood and the formation of fibrin clots both in vitro and in vivo. Heparin acts at multiple sites in the  normal coagulation system. Small amounts of heparin in combination with antithrombin III (heparin cofactor) can inhibit thrombosis by inactivating activated Factor X and inhibiting the conversion of prothrombin to thrombin. Once active thrombosis has developed, larger amounts of heparin can inhibit further coagulation by inactivating thrombin and  preventing the conversion of fibrinogen to fibrin. Heparin also prevents the formation of a stable fibrin clot by inhibiting the activation of the fibrin stabilizing factor.

PHARMACOKINETICS :
Heparin is not absorbed from the G.I. tract. Onset of anti coagulation is immediate with I.V. use and within 20 - 30 minutes with subcutaneous use. Peak plasma levels of Heparin Sodium are achieved 2 to 4 hours following subcutaneous administration, although considerable individual variations are possible. Biotransformation takes place in the liver and the reticulo-endothelial system. Heparin Sodium does not have fibrinolytic activity; therefore, it will not lyse the existing clots. Heparin Sodium does not cross the placental barrier and is not distributed in human milk. Mean half-life is 1.5 hours. Elimination is by renal excretion mainly as metabolites with small amounts being excreted unchanged in urine.

When heparin is added to an infusion solution for continuous intravenous administration, the container should be inverted at least 6 times to ensure adequate mixing and prevent pooling of the heparin in the solution.

Dosage :
The dosage of BLOCKASOL should be adjusted according to the patient’s coagulation test results. When BLOCKASOL is given by continuous intravenous infusion, the coagulation time should be determined approximately every 4 hours in the early stages of treatment. When the drug is administered intermittently by intravenous injection, coagulation tests should be performed before each injection during the early stages of treatment and at appropriate intervals thereafter. Dosage is considered adequate when the activated partial thromboplastin time (APTT) is 1.5 to 2 times normal or when the whole blood clotting time is elevated approximately 2.5 to 3 times the control value. After deep subcutaneous (intrafat) injections, tests for adequacy of dosage are best performed on samples drawn 4 - 6 hours after the injections. Periodic platelet counts, haematocrits, and tests for occult blood in stool are recommended during the entire course of heparin therapy, regardless of the route of administration. BLOCKASOL should not be mixed with doxorubicin, droperidol, ciprofloxacin, or mitoxantrone, since it has been reported that these drugs are incompatible with heparin and a precipitate may form.

Therapeutic Anticoagulant Effect with Full-Dose Heparin : Although dosage must be adjusted for the individual patient according to the results of suitable laboratory tests, the following dosage schedules may be used as guidelines : 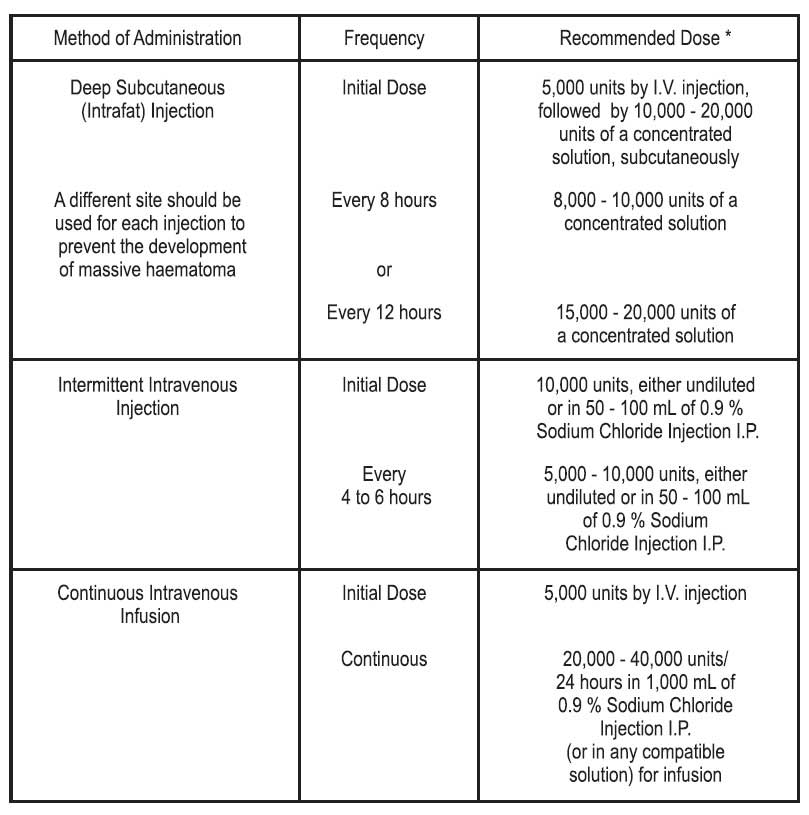 Surgery of the Heart and Blood Vessels :
Patients undergoing total body perfusion for open-heart surgery should receive an initial dose of not less than 150 units of heparin sodium per kg of body weight. Frequently, a dose of 300 units per kg is used for procedures estimated to last less than 60 minutes or 400 units per kg for those estimated to last longer than 60 minutes.

CONTRAINDICATIONS :
Heparin should not be used in-patients with hypersensitivity to heparin or any component; severe thrombocytopenia, subacute bacterial endocarditis, suspected intracranial haemorrhage, uncontrollable bleeding (unless secondary to disseminated intravascular coagulation). Also Heparin should not be used in patients in whom suitable blood coagulation tests e.g. the whole-blood clotting time, partial thromboplastin time, etc. cannot be performed at appropriate intervals.

WARNINGS :
Heparin is not intended for intramuscular use.

Hypersensitivity :
Patients with documented hypersensitivity to heparin should be given the drug only in clearly life-threatening situations. Haemorrhage : Haemorrhage can occur at virtually any site in patients receiving heparin. An unexplained fall in haematocrit, fall in blood pressure, or any other unexplained symptom should lead to serious consideration of a haemorrhagic event. Heparin sodium should be used with extreme caution in disease states in which there is increased danger of haemorrhage. Some of the conditions in which increased danger of haemorrhage exists are :

Thrombocytopenia :
Thrombocytopenia has been reported to occur in patients receiving heparin with a reported incidence of 0 to 30 %. Mild thrombocytopenia (count greater than 100,000/mm3) may remain stable or reverse even if heparin is continued. However, reduction in platelet count of any degree should be monitored closely. If the count falls below 100,000/mm3 or if recurrent thrombosis develops, the heparin product should be discontinued. If continued heparin therapy is essential, administration of heparin from a different organ source can be reinstituted with caution.

Miscellaneous :
This product contains benzyl alcohol as preservative. Benzyl alcohol has been reported to be associated with a fatal “Gasping Syndrome” in premature infants. Symptoms include a striking onset of gasping syndrome, hypotension, bradycardia and cardiovascular collapse.
PRECAUTIONS :
1.  General :
a. White Clot Syndrome : It has been reported that patients on heparin may develop new thrombus formation in association with thrombocytopenia resulting from irreversible aggregation of platelets induced by heparin, the so-called “white clot syndrome.” The process may lead to severe thromboembolic complications like skin necrosis, gangrene of the extremities that may lead to amputation, myocardial infarction, pulmonary embolism, stroke, and possibly death. Therefore, heparin administration should be promptly discontinued if a patient develops new thrombosis in association with a reduction in platelet count.
b. Heparin Resistance : Increased resistance to heparin is frequently encountered in fever, thrombosis, thrombophlebitis, infections with thrombosing tendencies, myocardial infarction, cancer, in postsurgical patients, and patients with antithrombin III deficiency.
c. Increased Risk to Older Patients, especially Women : A higher incidence of bleeding has been reported in patients, particularly women, over 60 years of age.
2. Laboratory Tests : Periodic platelet counts, haematocrits, and tests for occult blood in stool are recommended during the entire course of heparin therapy, regardless of the route of administration.
3. Drug/Laboratory Tests Interactions : Hyperaminotransferasemia : Significant elevations of aminotransferase (SGOT [S-AST] and SGPT [S-ALT]) levels have occurred in a high percentage of  patients (and healthy subjects) who have received heparin. Since aminotransferase determinations are important in the differential diagnosis of myocardial infarction, liver disease, and pulmonary emboli, rises that might be caused by drugs (like heparin) should be interpreted with caution.
4. Carcinogenesis, Mutagenesis, Impairment of Fertility : No long-term studies in animals have been performed to evaluate carcinogenic potential of heparin. Also, no reproduction studies in animals have been performed concerning mutagenesis or impairment of fertility.
5. Geriatric Use : A higher incidence of bleeding has been reported in patients over 60 years of age, especially women. Clinical studies indicated that lower doses of heparin may be indicated in these patients.
PREGNANCY AND LACTATION:

Nursing Mothers :
Heparin is not excreted in human milk.

INTERACTION :
a. Drugs Enhancing Heparin Effect :
Oral anticoagulants : Heparin sodium may prolong the one-stage prothrombin time. Therefore, when heparin sodium is given with dicumarol or warfarin sodium, a period of at least 5 hours after the last intravenous dose or 24 hours after the last subcutaneous dose should elapse before blood is drawn if a valid prothrombin time is to be obtained. Platelet inhibitors : Drugs such as acetylsalicylic acid, dextran, phenylbutazone, ibuprofen, indomethacin, dipyridamole, hydroxychloroquine and others that interfere with platelet aggregation reactions (the main haemostatic defense of heparinized patients) may induce bleeding and should be used with caution in patients receiving heparin sodium. The anticoagulant effect of heparin is enhanced by concurrent treatment with antithrombin III  (human) in patients with hereditary antithrombin III deficiency. Thus in order to avoid bleeding, reduced dosage of heparin is recommended during treatment with antithrombin III (human).

b. Drugs Decreasing Heparin Effect :
Digitalis, tetracyclines, nicotine, or antihistamines may partially counteract the anticoagulant action of heparin sodium. Heparin Sodium Injection should not be mixed with doxorubicin, droperidol, ciprofloxacin, or mitoxantrone, since it has been reported that these drugs are incompatible with heparin and a precipitate may form.

SIDE  EFFECTS :
1. Haemorrhage : Haemorrhage is the chief complication that may result from heparin sodium therapy, withdrawing the drug can usually control an overly prolonged clotting time or minor bleeding during therapy. Adrenal haemorrhage, Ovarian (corpus luteum) haemorrhage and Retroperitoneal haemorrhage are also known to occur.
2. Local irritation : Local irritation, erythema, mild pain, haematoma or ulceration may follow deep subcutaneous (intrafat) injection of heparin sodium. These complications are much more common after intramuscular use, and such use is not recommended.
3. Hypersensitivity : Generalized hypersensitivity reactions have been reported, with chills, fever, and urticaria as the most usual manifestations and asthma, rhinitis, lacrimation, headache, nausea and vomiting, and anaphylactoid reactions, including shock, occurring more rarely. Itching and burning, especially on the plantar site of the feet, may occur. Thrombocytopenia has been reported to occur in patients receiving heparin with a reported incidence of 0 - 30 %. While often mild and of no obvious clinical significance, a reduction in platelet count can be accompanied by severe thromboembolic complications such as skin necrosis, gangrene of the extremities that may lead to amputation, myocardial infarction, pulmonary embolism, stroke, and possibly death. Certain episodes of painful, ischemic, and cyanosed limbs have in the past been attributed to allergic vasospastic reactions. Whether these are in fact identical to the thrombocytopenia associated complications remains to be determined.
4. Miscellaneous : Osteoporosis following long-term administration of high doses of heparin, cutaneous necrosis after systemic administration, suppression of aldosterone synthesis, delayed transient alopecia, priapism and rebound hyperlipemia on discontinuation of heparin sodium have also been reported. Significant elevations of aminotransferase (SGOT [S-AST] and SGPT [S-ALT]) levels have occurred in a high percentage of patients (and healthy subjects) who have received heparin.

OVERDOSAGE AND TREATMENT OF OVERDOSAGE :
Symptoms : Bleeding is the chief sign of heparin overdosage. Nosebleeds, blood in urine or tarry stools may be noted as the first sign of bleeding. Easy bruising or petechial formations may precede frank bleeding.
Treatment : Neutralization of heparin effect. When clinical circumstances (bleeding) require reversal of heparinization, protamine sulfate (1 % solution) by slow infusion will neutralize heparin sodium. No more than 50 mg should be administered, very slowly, in any 10 minute period. Each mg of protamine sulfate neutralizes approximately 100 I.P. heparin units. The amount of protamine required decreases over time as heparin is metabolized. Although the metabolism of heparin is complex, it may, for the purpose of choosing a protamine dose, be assumed to have a half life of about 1/2 hour after intravenous injection. Administration of protamine sulfate can cause severe hypotensive and anaphylactoid reactions. Because fatal reactions often resembling anaphylaxis have been reported, the drug should be given only when resuscitation techniques and treatment of anaphylactoid shock are readily available.

PHARMACEUTICAL  PRECAUTIONS :
Parenteral drug products should be inspected visually for particulate matter and discoloration prior to administration, whenever solution and container permit. Slight discoloration does not alter potency.

STORAGE :
Store in a cool place.
Do not freeze.