ACTIONS :
Sodium nitrite is an antidote for cyanide poisoning. Cyanide poisoning can be rapidly fatal. When hydrogen cyanide gas or large doses are taken, toxicity occurs within a few seconds, and death occurs within minutes. With smaller doses, toxicity occurs within minutes, and may include the following symptoms : constriction of the throat, nausea, vomiting, giddiness, headache, palpitations, hyperpnoea, then dyspnoea, bradycardia (which may be preceded by  tachycardia), unconsciousness, violent convulsions followed by death. Sodium nitrite is generally used in conjunction with sodium thiosulfate, and often amyl nitrite, in the treatment of cyanide poisoning. Cyanide has a high affinity for ferric ions, and reacts readily with the ferric ion of mitochondrial cytochrome oxidase. Sodium nitrite reacts with haemoglobin  to form methaemoglobin, and cyanide preferentially binds to methaemoglobin, restoring cytochrome oxidase activity. As cyanide dissociates from methaemoglobin, it is converted to the relatively non-toxic thiocyanate by the enzyme rhodanese. Sodium thiosulfate acts as a sulfur donor for rhodanese. Sodium nitrite also produces vasodilation by relaxing vascular smooth muscle.

INDICATIONS :
SODIUM  NITRITE  INJECTION  USP in conjunction with sodium thiosulfate, is indicated for use as an antidote in the treatment of cyanide poisoning.

Administration :
SODIUM  NITRITE  INJECTION  USP is administered by intravenous injection. Sodium thiosulfate should be administered immediately following the sodium nitrite dosage. Methaemoglobin concentration should be monitored and must not exceed 40 %.

Dosage :
Therapy should be instituted immediately based upon reasonable suspicion of cyanide toxicity. The characteristic smell of bitter almonds may not be obvious, and is not detectable by all individuals. Sodium nitrite should only be administered in several cases.

Paediatric dose :
The usual paediatric dose is 4 mg/kg body weight (0.13 ml of a 3 %    solution /kg body weight) [range 4.0 to 10 mg/kg body weight. 0.13 to 0.33 ml/kg body weight] or 180 to 240 mg/m2 ] administered at a rate of 75 to 150 mg/min [2.5 to 5 ml of a  3 % solution/min]. It is advisable to begin with doses at the lower end of the recommended range and increase to the desired effect. A maximum dose of 300 mg (10 ml of a 3 % solution) is recommended. For children under 25 kg, where anaemia is suspected, it is recommended that the dose of sodium nitrite be reduced relative to the haemoglobin measurement. The table below outlines a dosage regimen as a function of haemoglobin concentration. 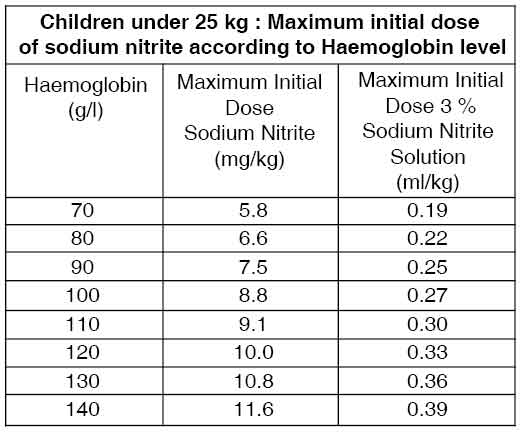 In both adults and children, if symptoms of cyanide toxicity recur , treatment with half the original dose of sodium nitrite and sodium thiosulfate treatment may be repeated 30 minutes after the initial dose.

Use in Pregnancy :
Little is known about the effects of sodium nitrite on pregnancy and the foetus, however, problems in pregnancy have not been documented . Concerns about adverse effects on the  foetus may have little relevance in the context of life threatening cyanide poisoning in the pregnant women. Animal experiments indicate that some sodium nitrite crosses the placenta and that foetal methaemoglobinaemia may be induced. The risk to the foetus from severe maternal cyanide poisoning should be evaluated against the risk of foetal methaemoglobinaemia.

Use in Lactation :
It is not known whether sodium nitrite is distributed into breast milk. Concerns about adverse effects on the breastfed infant may have little relevance in the context of life threatening cyanide poisoning in the mother. No animal studies have addressed the question of sodium nitrite excertion in breast milk or its possible effects on the nursing infant.

SIDE  EFFECTS :
SODIUM  NITRITE  INJECTION  USP may cause nausea and vomiting , abdominal pain, dizziness, headache, flushing, cyanosis, tachypnoea, and dyspnoea, vasodilation resulting in syncope, hypotension, and tachycardia may occur. Overdosage may result in cardiovascular collapse, coma, convulsions, and death. Ionised nitrite readily oxidise haemoglobin to methaemoglobin, causing methaemoglobinaemia. SODIUM  NITRITE  INJECTION   USP is a precursor for the formation of nitrosamines, many of which are carcinogenic in animals, but a relationship with human cancer has not been established.

TREATMENT  OF  OVERDOSAGE :
Treatment of overdose involves the following measures :

PRESENTATION :
SODIUM  NITRITE  INJECTION   USP is supplied as 300 mg of Sodium Nitrite USP in 10 ml aqueous solution.
Such one vial of 10 ml is packed in a Box.