PHARMACOKINETICS :
After IV administration, plasma concentrations of flumazenil follow a two-exponential decay model. The pharmacokinetics of flumazenil are dose-proportional up to 100 mg.

Distribution :
Flumazenil is extensively distributed in the extravascular space with an initial distribution half-life of 4 to 11 minutes and a terminal half-life of 40 to 80 minutes. Peak concentrations of flumazenil are proportional to dose, with an apparent initial volume of distribution of 0.5 L/kg. The volume of distribution at steady-state is 0.9 to 1.1 L/kg. Flumazenil is a weak lipophilic base. Protein binding is approximately 50 % and the drug showsno preferential partitioning into red blood cells. Albumin accounts for two thirds of plasma protein binding.

The Elderly :
The pharmacokinetics of flumazenil are not significantly altered in the elderly.

Dosage :
Adult Patients :
For the reversal of the sedative effects of benzodiazepines administered for conscious sedation, the recommended initial dose of FLUMAZENIL  INJECTION  USP is 0.2 mg (2 ml) administered intravenously over 15 seconds. If the desired level of consciousness is not obtained after waiting an additional 45 seconds, a second dose of 0.2 mg (2 ml) can be injected and repeated at 60-second intervals where necessary (up to a maximum of 4 additional times) to a maximum total dose of 1 mg (10 ml). The dosage should be individualized based on the patients response, with most patients responding to doses of 0.6 mg to 1 mg. In the event of resedation, repeated doses may be administered at 20-minute intervals as needed. For repeat treatment, no more than 1 mg (given as 0.2 mg/min) should be administered at any one time, and no more than 3 mg should be given in any one hour. It is recommended that FLUMAZENIL  INJECTION  USP be administered as the series of small injections described (not as a single bolus injection) to allow the practitioner to control the reversal of sedation to the approximate endpoint desired and to minimize the possibility of adverse effects .

Paediatric Patients :
For the reversal of the sedative effects of benzodiazepines administered for conscious sedation in paediatric patients greater than 1 year of age, the recommended initial dose is 0.01 mg/kg (up to 0.2 mg) administered intravenously over 15 seconds. If the desired level of consciousness is not obtained after waiting an additional 45 seconds, further injections of 0.01 mg/kg (up to 0.2 mg) can be administered and repeated at 60-second intervals where necessary (up to a maximum of 4 additional times) to a maximum total dose of 0.05 mg/kg or 1 mg, whichever is lower. The dose should be individualized based on the patients response.It is recommended that FLUMAZENIL  INJECTION  USP be administered as the series of small injections described (not as a single bolus injection) to allow the practitioner to control the reversal of sedation to the approximate endpoint desired and to minimize the possibility of adverse effects .The safety and efficacy of FLUMAZENIL  INJECTION  USP in the reversal of conscious sedation in paediatric patients below the age of 1 year have not been established.

WARNINGS :
The reversal of benzodiazepine effects may be associated with the onset of seizures in certain high-risk populations. Possible risk factors for seizures include : concurrent major sedative-hypnotic drug withdrawal, recent therapy with repeated doses of parenteral benzodiazepines, myoclonic jerking or seizure activity prior to flumazenil administration in overdose cases, or concurrent cyclic antidepressant poisoning. FLUMAZENIL  INJECTION  USP is not recommended in cases of serious cyclic antidepressant poisoning, as manifested by motor abnormalities (twitching, rigidity, focal seizure), dysrhythmia (wide QRS, ventricular dysrhythmia, heart block), anticholinergic signs (mydriasis, dry mucosa, hypoperistalsis), and cardiovascular collapse at presentation. In such cases FLUMAZENIL INJECTION  USP should be withheld and the patient should be allowed to remain sedated  (with ventilatory and circulatory support as needed) until the signs of antidepressant toxicity have subsided. Treatment with FLUMAZENIL  INJECTION  USP has no known benefit to the seriously ill mixed-overdose patient other than reversing sedation and should  not be used in cases where seizures (from any cause) are likely. Most convulsions associated with flumazenil administration require treatment and have been successfully managed with benzodiazepines, phenytoin or barbiturates. Because of the presence of flumazenil, higher than usual doses of benzodiazepines may be required.

The use of FLUMAZENIL  INJECTION  USP to reverse the effects of benzodiazepines used for conscious sedation has been evaluated in one open-label clinical trial involving 107 paediatric patients between the ages of 1 and 17 years. This study suggested that paediatric patients who have become fully awake following treatment with flumazenil may experience a recurrence of sedation, especially younger patients (ages 1 to 5). Resedation was experienced in 7 of 60 patients who were fully alert 10 minutes after the start of FLUMAZENIL INJECTION USP administration. No patient experienced a return to the baseline level of sedation. Mean time to resedation was 25 minutes (range : 19 to 50 minutes). The safety and effectiveness of repeated flumazenil administration in paediatric patients experiencing resedation have not been established.

Pregnancy : Pregnancy Category C
There are no adequate and well-controlled studies of the use of flumazenil in pregnant women. Flumazenil should be used during pregnancy only if the potential benefit justifies the potential risk to the foetus. The use of FLUMAZENIL  INJECTION  USP to reverse the effects of benzodiazepines used during labor and delivery is not recommended because the effects of the drug in the newborn are unknown.

Nursing mothers :
It is not known whether flumazenil is excreted in human milk. For this reason, breast-feeding should be interrupted for 24 hours when flumazenil is used during lactation.

SIDE  EFFECTS :
Flumazenil is generally well tolerated. In postoperative use, nausea and/or vomiting are observed, particularly if opiates have also been employed. Flushing has also been noted. If patients are awakened too rapidly, they may become agitated, anxious or fearful. Transient increases in blood pressure and heart rate may also occur Excessively and/or rapidly injected doses of flumazenil may induce benzodiazepine withdrawal symptoms such as anxiety attacks, tachycardia, dizziness, and sweating in patients on long-term benzodiazepine treatment. Although clinical experience with flumazenil is limited, seizures and/or cardiac arrhythmias have been observed in patients who are physically dependent on benzodiazepines, and in multiple-drug overdose, particularly in the presence of tricyclic antidepressants. Flumazenil has been reported to provoke panic attacks in patients with a history of panic disorders. The following table summarizes the adverse reactions which occurred with an incidence of >1 %. : 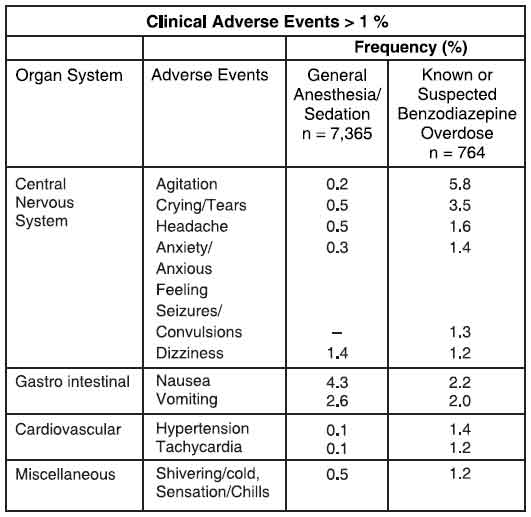 INFORMATION  FOR  PATIENTS :
FLUMAZENIL  INJECTION  USP does not consistently reverse amnaesia. Patients cannot be expected to remember information told to them in the postprocedure period and instructions given to patients should be reinforced in writing or given to a responsible family member. Physicians are advised to discuss with patients or their guardians, both before surgery and at discharge, that although the patient may feel alert at the time of discharge, the effects of the benzodiazepine (eg, sedation) may recur. As a result, the patient should be instructed, preferably in writing, that their memory and judgment may be impaired and specifically advised :
1. Not to engage in any activities requiring complete alertness, and not to operate hazardous machinery or a motor vehicle during the first 24 hours after discharge, and it is certain no residual sedative effects of the benzodiazepine remain.
2. Not to take any alcohol or non-prescription drugs during the first 24 hours after flumazenil administration or if the effects of the benzodiazepine persist.

OVERDOSAGE :
There is limited experience of acute overdose with FLUMAZENIL  INJECTION  USP.

TREATMENT  OF  OVERDOSAGE :
There is no specific antidote for overdose with FLUMAZENIL  INJECTION  USP. Treatment of an overdose with FLUMAZENIL  INJECTION  USP should consist of general supportive measures including monitoring of vital signs and observation of the clinical status of the patient. Intravenous bolus administration of doses ranging from 2.5 to 100 mg (exceeding those recommended) of FLUMAZENIL  INJECTION  USP, when administered to healthy normal volunteers in the absence of a benzodiazepine agonist, produced no serious adverse reactions, severe signs or symptoms, or clinically significant laboratory test abnormalities. In clinical studies, most adverse reactions to flumazenil were an extension of the pharmacologic effects of the drug in reversing benzodiazepine effects. Reversal with an excessively high dose of FLUMAZENIL INJECTION USP may produce anxiety, agitation, increased muscle tone, hyperaesthesia and possibly convulsions. Convulsions have been treated with barbiturates, benzodiazepines and phenytoin, generally with prompt resolution of the seizures.

PRESENTATION :
FLUMAZENIL  INJECTION  USP is supplied as 0.500 mg Flumazenil USP in  5 ml aqueous  solution.
Such  5 Ampoules of  5 ml are packed in a carton.