LEVOFLOXACIN  TABLETS (Levofloxacin) is a synthetic broad-spectrum antibacterial agent. Levofloxacin, a chiral fluorinated carboxyquinolone, is the pure (-)-(S)-enantiomer of the racemic drug substance ofloxacin. Chemically, Levofloxacin is (-)-(S)-9-Fluoro-2,3-dihydro-3-methyl-10-(4-methyl-1-piperazinyl)-7-oxo-7H-pyrido[1,2,3-de]1, 4-benzoxazine-6-carboxylic acid, hemihydrate. The molecular formula is C18H20FN3O4 • ½ H2O and the molecular weight is 370.38.

LEVOFLOXACIN  TABLETS are brown coloured, elongated, biconvex, film coated tablets having  breakline on one side & plain on other side.

ACTIONS :
Levofloxacin is a synthetic antibacterial agent of the fluoroquinolone class and is the S (-) enantiomer of the racemic active substance ofloxacin.
Mechanism of action :
As a fluoroquinolone antibacterial agent, levofloxacin acts on the DNA-DNA-gyrase complex and topoisomerase IV.
PK/PD relationship :
The degree of the bactericidal activity of levofloxacin depends on the ratio of the maximum concentration in serum (Cmax) or the area under the curve (AUC) and the minimal inhibitory concentration (MIC).
Mechanism of resistance :
Resistance to levofloxacin is acquired through a stepwise process by target site mutations in both type II topoisomerases, DNA gyrase and topoisomerase IV. Other resistance mechanisms such as permeation barriers (common in Pseudomonas aeruginosa) and efflux mechanisms may also affect susceptibility to levofloxacin. Cross-resistance between levofloxacin and other fluoroquinolones is observed. Due to the mechanism of action, there is generally no cross-resistance between levofloxacin and other classes of antibacterial agents.
Breakpoints :
The EUCAST recommended MIC breakpoints for levofloxacin, separating susceptible from intermediately susceptible organisms and intermediately susceptible from resistant organisms are presented in the below table for MIC testing (mg/l). EUCAST clinical MIC breakpoints for levofloxacin (version 2.0 2012-01-01) : 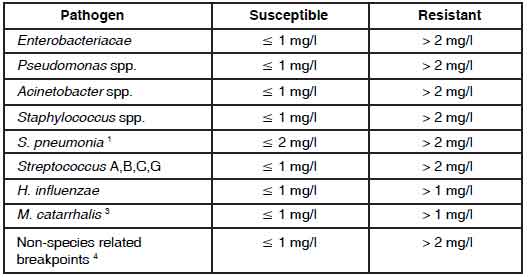 1. The breakpoints for levofloxacin relate to high dose therapy.
2. Low-level fluoroquinolone resistance (ciprofloxacin MICs of 0.12 - 0.5 mg/l) may occur but there is no evidence that this resistance is of clinical importance in respiratory tract infections with H. influenzae.
3. Strains with MIC values above the susceptible breakpoint are very rare or not yet reported. The identification and antimicrobial susceptibility tests on any such isolate must be repeated and if the result is confirmed the isolate must be sent to a reference laboratory. Until there is evidence regarding clinical response for confirmed isolates with MIC above the current resistant breakpoint they should be reported resistant.
4. Breakpoints apply to an oral dose of 500 mg x 1 to 500 mg x 2 and an intravenous dose of 500 mg x 1 to 500 mg x 2.
The prevalence of resistance may vary geographically and with time for selected species and local information on resistance is desirable, particularly when treating severe infections. As necessary, expert advice should be sought when the local prevalence of resistance is such that the utility of the agent in at least some types of infections is questionable.
PHARMACOKINETICS :
Absorption :
Orally administered levofloxacin is rapidly and almost completely absorbed with peak plasma concentrations being obtained within 1 - 2 h. The absolute bioavailability is 99 - 100 %. Food has little effect on the absorption of levofloxacin. Steady state conditions are reached within 48 hours following a 500 mg once or twice daily dosage regimen.
Distribution :
Approximately 30 - 40 % of levofloxacin is bound to serum protein. The mean volume of distribution of levofloxacin is approximately 100 l after single and repeated 500 mg doses, indicating widespread distribution into body tissues.
Penetration into tissues and body fluids :
Levofloxacin has been shown to penetrate into bronchial mucosa, epithelial lining fluid, alveolar macrophages, lung tissue, skin (blister fluid), prostatic tissue and urine. However, levofloxacin has poor penetration intro cerebro-spinal fluid.
Biotransformation :
Levofloxacin is metabolised to a very small extent, the metabolites being desmethyl-levofloxacin and levofloxacin N-oxide. These metabolites account for < 5 % of the dose and are excreted in urine. Levofloxacin is stereochemically stable and does not undergo chiral inversion.
Elimination :
Following oral and intravenous administration, levofloxacin is eliminated relatively slowly from the plasma (t½ : 6 - 8 hours). Excretion is primarily by the renal route (> 85 % of the administered dose). The mean apparent total body clearance of levofloxacin following a 500 mg single dose was  175 +/- 29.2 ml/min. There are no major differences in the pharmacokinetics of levofloxacin following intravenous and oral administration, suggesting that the oral and intravenous routes are interchangeable.
INDICATIONS :
LEVOFLOXACIN  TABLETS is indicated in adults for the treatment of the following infections :
• Acute bacterial sinusitis
• Acute exacerbations of chronic bronchitis
• Community-acquired pneumonia
• Complicated skin and soft tissue infections For the above-mentioned infections LEVOFLOXACIN  TABLETS should be used only when it is considered inappropriate to use antibacterial agents that are commonly recommended for the initial treatment of these infections.
• Pyelonephritis and complicated urinary tract infections
• Chronic bacterial prostatitis
• Uncomplicated cystitis
• Inhalation Anthrax : post exposure prophylaxis and curative treatment.
LEVOFLOXACIN  TABLETS may also be used to complete a course of therapy in patients who have shown improvement during initial treatment with intravenous levofloxacin. Consideration should be given to official guidance on the appropriate use of antibacterial agents.
DOSAGE AND ADMINISTRATION:

Administration :
LEVOFLOXACIN  TABLETS are for oral use.

Method of Administration :
LEVOFLOXACIN  TABLETS should be swallowed without crushing and with sufficient amount of liquid. They may be divided at the score line to adapt the dose. The tablets may be taken during meals or between meals. LEVOFLOXACIN  TABLETS should be taken at least two hours before or after iron salts, zinc salts, magnesium- or aluminium-containing antacids, or didanosine (only didanosine formulations with aluminium or magnesium containing buffering agents), and sucralfate administration, since reduction of absorption can occur.

Dosage :
LEVOFLOXACIN  TABLETS are administered once or twice daily. The dosage depends on the type and severity of the infection and the susceptibility of the presumed causative pathogen. LEVOFLOXACIN  TABLETS may also be used to complete a course of  therapy in patients who have shown improvement during initial treatment with intravenous levofloxacin ; given the bioequivalence of the parenteral and oral forms, the same dosage can be used. The following dose recommendations can be given for LEVOFLOXACIN 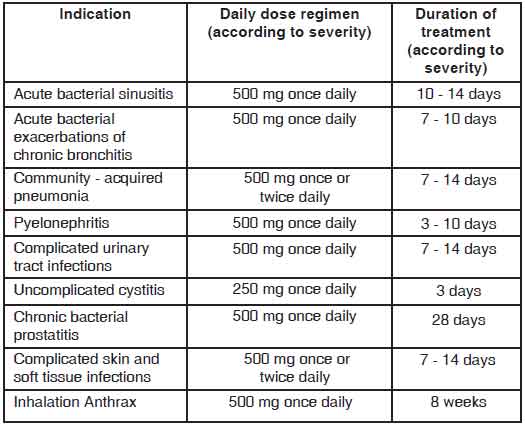 Impaired liver function :
No adjustment of dose is required since levofloxacin is not metabolised to any relevant extent by the liver and is mainly excreted by the kidneys.

Elderly population :
No adjustment of dose is required in the elderly, other than that imposed by consideration of renal function.

CONTRAINDICATIONS :
LEVOFLOXACIN  TABLETS  are contraindicated in :

• patients hypersensitive to levofloxacin or other quinolones or any of the excipients.
•  patients with epilepsy.
•  patients with history of tendon disorders related to fluoroquinolone administration.
•  children or growing adolescents.
•  during pregnancy.
•  breast-feeding women.

WARNINGS  AND  PRECAUTIONS :
In the most severe cases of pneumococcal pneumonia LEVOFLOXACIN  TABLETS may not be the optimal therapy. Nosocomial infections due to P. aeruginosa may require combination therapy.

Methicillin-resistant Staphylococcus aureus (MRSA) :
Levofloxacin is not effective against infections caused by MRSA. In infections suspicious for MRSA levofloxacin should be combined with an agent approved to treat MRSA infections.

Tendinitis and tendon rupture :
Tendinitis may rarely occur. It most frequently involves the Achilles tendon and may lead to tendon rupture. The risk of tendinitis and tendon rupture is increased in the elderly and in patients using corticosteroids. Close monitoring of these patients is therefore necessary if they are prescribed LEVOFLOXACIN  TABLETS  All patients should consult their physician if they experience symptoms of tendinitis. If tendinitis is suspected, treatment with LEVOFLOXACIN  TABLETS must be halted immediately, and appropriate treatment (e.g. immobilisation) must be initiated for the affected tendon.

Clostridium difficile-associated disease :
Diarrhoea, particularly if severe, persistent and/or bloody, during or after treatment with LEVOFLOXACIN  TABLETS, may be symptomatic of Clostridium difficile - associated disease, the most severe form of which is pseudomembranous enterocolitis. If pseudomembranous enterocolitis is suspected, LEVOFLOXACIN  TABLETS must be stopped immediately and patients should be treated with supportive measures and specific therapy without delay (e.g. oral metronidazole or vancomycin). Products inhibiting the peristalsis are contraindicated in this clinical situation.

Patients predisposed to seizures :
LEVOFLOXACIN  TABLETS are contraindicated in patients with a history of epilepsy and, as with other quinolones, should be used with extreme caution in patients predisposed to seizures, such as patients with pre-existing central nervous system damage; concomitant treatment with fenbufen and similar non-steroidal anti-inflammatory drugs or with drugs which lower the cerebral seizure threshold, such as theophylline. In case of convulsive seizures, treatment with levofloxacin should be discontinued.

Prevention of photosensitization :
Although photosensitisation is very rare with levofloxacin, it is recommended that patients should not expose themselves unnecessarily to strong sunlight or to artificial UV rays (e.g. sunray lamp, solarium), in order to prevent photosensitization.

Cardiac disorders :
Caution should be taken when using fluoroquinolones, including levofloxacin, in patients with known risk factors for prolongation of the QT interval such as, for example :

-   concomitant use of drugs that are known to prolong the QT interval (e.g. Class IA and III antiarrhythmics, tricyclic antidepressants, macrolides).

Peripheral neuropathy :
Sensory or sensorimotor peripheral neuropathy has been reported in patients receiving fluoroquinolones, including levofloxacin, which can be rapid in its onset. Levofloxacin should be discontinued if the patient experiences symptoms of neuropathy in order to prevent the development of an irreversible condition.

Opiates :
In patients treated with levofloxacin, determination of opiates in urine may give false-positive results. It may be necessary to confirm positive opiate screens by a more specific method.

Hepatobiliary disorders :
Cases of hepatic necrosis up to life threatening hepatic failure have been reported with levofloxacin, primarily in patients with severe underlying diseases, e.g. sepsis. Patients should be advised to stop treatment and contact their doctor if signs and symptoms of hepatic disease develop such as anorexia, jaundice, dark urine, pruritus or tender abdomen.

Pregnancy : Category  C
There are limited data from the use of levofloxacin in pregnant women. Animal studies do not indicate direct or indirect harmful effects with respect to reproductive toxicity. However in the absence of human data and due to experimental data suggesting a risk of damage to the weight - bearing cartilage of the growing organism by fluoroquinolones, levofloxacin should only be used in pregnancy if the benefit is considered to outweigh the risks, and there are no available treatment alternatives.

Nursing Mothers :
Levofloxacin is contraindicated in breast - feeding women. There is insufficient information on the excretion of levofloxacin in human milk ; however other fluoroquinolones are excreted in breast milk. In the absence of human data and due to experimental data suggesting a risk of damage to the weight-bearing cartilage of the growing organism by fluoroquinolones, LEVOFLOXACIN  TABLETS must not be used in breast-feeding women.

Paediatric Use :
Quinolones, including levofloxacin, cause arthropathy and osteochondrosis in juvenile animals of several species.

INTERACTIONS  AND  INCOMPATIBILITIES :
Effect of other medicinal products on levofloxacin.

Theophylline, fenbufen or similar non-steroidal anti-inflammatory drugs :
No pharmacokinetic interactions of levofloxacin were found with theophylline in a clinical study. However a pronounced lowering of the cerebral seizure threshold may occur when quinolones are given concurrently with theophylline, non-steroidal anti-inflammatory drugs, or other agents which lower the seizure threshold. Levofloxacin concentrations were about 13 % higher in the presence of fenbufen than when administered alone.

Effect of levofloxacin on other medicinal products :
Ciclosporin :
The half-life of ciclosporin was increased by 33 % when coadministered with levofloxacin.

SIDE  EFFECTS :
Side effects are listed below by system organ class and frequency.

OVERDOSAGE  :
According to toxicity studies in animals or clinical pharmacology studies performed with supra-therapeutic doses, the most important signs to be expected following acute overdose of LEVOFLOXACIN  TABLETS are central nervous system symptoms such as confusion, dizziness, impairment of consciousness and convulsive seizures, increases in QT interval as well as gastro-intestinal reactions such as nausea and mucosal erosions. CNS effects including confusional state, convulsion, hallucination, and tremor have been observed in post marketing experience.

TREATMENT  OF  OVERDOSAGE :
In the event of overdose, symptomatic treatment should be implemented. ECG monitoring should be undertaken, because of the possibility of QT interval prolongation. Antacids may be used for protection of gastric mucosa. Haemodialysis, including peritoneal dialysis and CAPD, are not effective in removing levofloxacin from the body. No specific antidote exists.

STORAGE :
Store below 30°C, protected from moisture and light.
Do not refrigerate.