Reserpine  Injection  USP (Reserpine) is an alkaloid obtained from the roots of certain species of Rauwolfia (Apocynaceae), mainly Rauwolfia Serpentina and R. Vomitoria or by synthesis. Chemically Reserpine is Yohimban- 16- carboxylic acid, 11, 17-dimethoxy-18-[(3,4,5-trimethoxybenzoyl)oxy]-methyl ester. The molecular formula is C33H40N2O9  and the molecular weight is 608.68. 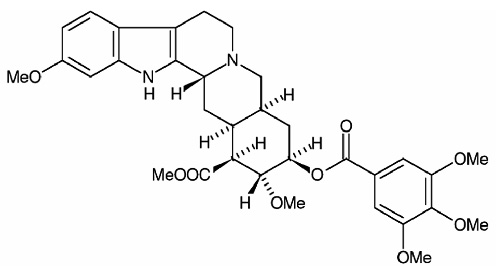 ACTIONS :
Reserpine binds tightly to storage vesicles in central and peripheral adrenergic neurons, and the drug remains at such sites for prolonged periods of time. The storage vesicles are rendered dysfunctional as a result of their interaction with reserpine, and nerve endings lose their ability to concentrate and store norepinephrine and dopamine. Catecholamines leak into the cytoplasm, where they are destroyed by intraneuronal monoamine oxidase, and little or no active transmitter is discharged from nerve endings when they are depolarized. A similar process occurs at storage sites for 5-hydroxytryptamine. Reserpine-induced depletion of biogenic amines correlates with evidence of sympathetic dysfunction and antihypertensive effects. Recovery of sympathetic function requires synthesis of new storage vesicles, which takes days to weeks after discontinuation of the drug. Since reserpine depletes amines in the CNS as well as in the peripheral adrenergic neuron, it is probable that its antihypertensive effects are related to both a central and a peripheral action; it is certain that many of the side effects of reserpine are related to its effects in the CNS. Patients with chronic mental illness treated with Reserpine become relaxed, sociable and co-operative.

PHARMACOKINETICS :
Reserpine is absorbed from the gastrointestinal tract with a reported bioavailability of 50 %. It is extensively metabolised and is excreted slowly in the urine and faeces. In the first 4 days, about 8 % has been reported to be excreted in the urine, mainly as metabolites, and about 60 % in the faeces, mainly unchanged. Reserpine crosses the placenta and the blood-brain barrier and also appears in breast milk.

INDICATIONS :
Reserpine is recommended for the treatment of hypertension. In severe hypertension or long established cases of hypertension, Reserpine may be used together with more potent hypertensives (allowing them to be used in smaller doses) and in which case, the reserpine enhances the reaction to bring about the desired relief within a short time. Patients vary in their response to reserpine and dosage must be adjusted to individual requirements.

Administration :
Reserpine  Injection  USP is for I.M. use.

WARNINGS :
Reserpine  Injection  USP contains benzyl alcohol as preservative. Benzyl alcohol has been reported to be associated with a fatal "Gasping Syndrome" in premature infants. Symptoms include a striking onset of gasping syndrome, hypotension, bradycardia and cardiovascular collapse.

FDA Pregnancy Category C.
Reserpine crosses the placenta. Adequate and well-controlled studies have not been done in humans. However, possible adverse effects in infants of mothers who received reserpine include increased respiratory secretions, nasal congestion, cyanosis and anorexia.
Reserpine was found to be teratogenic in rats given parenteral doses of up to 2 mg per kg of body weight (mg/kg) and was embryocidal in guinea pigs given parenteral doses of 0.5 mg per day.

Breast-feeding :
Problems in humans have not been documented. However, Reserpine is distributed into breast milk. Possible adverse effects in infants of mothers who received reserpine include increased respiratory secretions, nasal congestion, cyanosis, and anorexia.

Paediatrics :
Appropriate studies on the relationship of age to the effects of the reserpine have not been performed in the paediatric population. However, paediatrics-specific problems that would limit the usefulness of these medications in children are not expected.

Geriatrics :
Although appropriate studies on the relationship of age to the effects of the reserpine have not been performed in the geriatric population, the elderly may be more sensitive to the CNS depressant and hypotensive effects. In addition, elderly patients are more likely to have age-related renal function impairment, which may require caution in patients receiving reserpine. A lower dose is recommended in the elderly.

Dental :
Use of Reserpine may decrease or inhibit salivary flow, thus contributing to the development of caries, periodontal disease, oral candidiasis, and discomfort.

PRECAUTIONS :
Reserpine should not be used in patients with depression or a history of depression, with active peptic ulcer, or ulcerative colitis, and in patients with Parkinsons disease. It should also be avoided in phaeochromocytoma. It should be used with caution in debilitated or elderly patients, and in the presence of cardiac arrhythmias, myocardial infarction, renal insufficiency, gallstones, epilepsy, or allergic conditions such as bronchial asthma. If used in patients requiring electroconvulsive therapy an interval of at least 7 to 14 days should be allowed to elapse between the last dose of reserpine and the commencement of the shock treatment. It is probably not necessary to discontinue treatment with Reserpine during anaesthesia, although the effects of CNS depressants may be enhanced by Reserpine.

SIDE  EFFECTS :
Side-effects commonly include nasal congestion, headache and CNS symptoms including depression, drowsiness, dizziness, lethargy, nightmare and symptoms of increased gastro-intestinal tract motility including diarrhoea, abdominal cramps and at higher doses, increased gastric acid secretion.  Respiratory distress, cyanosis, anorexia and lethargy may occur in infants whose mothers have received Reserpine prior to delivery. Higher doses may cause flushing, bradycardia, severe depression which may lead to suicide and extrapyramidal effects. Hypotension, coma, convulsions, respiratory depression and hypothermia also occur in overdosage.  Hypotension is also more common in patients following a cerebrovascular accident. Breast engorgement and galactorrhoea, gynaecomastia, increased prolactin concentrations, decreased libido, impotence, sodium retention, oedema, decreased or increased appetite, weight gain, miosis, dry mouth, sialorrhoea, dysuria, rashes, pruritus and thrombocytopenic purpura have also been reported. Reserpine has been shown to be tumorigenic in rodents following administration of large doses.  Several reports have suggested an association between the ingestion of reserpine and the development of neoplasms of the breast but other surveys have failed to confirm the association.

OVERDOSAGES  &  TREATMENT OF OVERDOSE :
Flushing, insomnia, bradycardia, severe mental depression and Parkinson like syndrome. Respiration may be affected, with death ultimately resulting from central respiratory depression. If the patient is not in a coma, emesis should be induced or the stomach emptied by aspiration and lavage. Atropine sulphate may be used to relieve parasympathomimetic side-effects such as nasal congestion. Signs of motor dysfunction e.g. tremors, stiffness may be treated with benzhexol or other anti-Parkinsonism agents. Respiration may have to be assisted.

PRESENTATION :
Reserpine  Injection  USP is supplied as 2.5 mg Reserpine USP in 1 ml aqueous solution.
Such 100 ampoules are packed in a box.