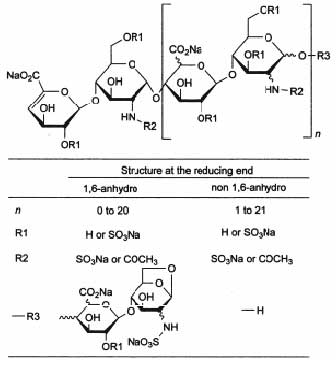 ENOXOL is a clear, colourless to pale yellow solution filled in a single dose ready to use prefilled graduated syringe.

ACTIONS :
Enoxaparin is a low molecular weight heparin which has antithrombotic activity. It is characterised by a higher ratio of antithrombotic activity to anticoagulant activity than unfractionated heparin. At recommended doses, it does not significantly influence platelet aggregation, binding of fibrinogen to platelets or global clotting tests such as APTT and prothrombin time.

PHARMACOKINETICS :
The pharmacokinetic parameters of enoxaparin sodium have been studied primarily in terms of the time course of anti-Xa activity and also by anti-IIa activity, at the recommended dosage ranges after single and repeated subcutaneous administration and after single intravenous administration. The quantitative determination of anti-Xa and anti-IIa pharmacokinetic activities was conducted by validated amidolytic methods with specific substrates and an enoxaparin standard calibrated against the international standard for LMWHs (NIBSC).

Bioavailability and Absorption :
After subcutaneous injection of 20 to 80 mg and 1 or 2 mg/kg, enoxaparin sodium is rapidly and completely absorbed. The absorption is directly proportional to the dose administered indicating that, unlike unfractionated heparin, absorption of enoxaparin sodium is linear. The absolute bioavailability of enoxaparin sodium after subcutaneous injection, based on anti-Xa activity, is close to 100 %. Injection volume and dose concentration over the range 100-200 mg/ml does not affect pharmacokinetic parameters in healthy volunteers. The mean maximum plasma anti-Xa activity is observed 3 to 5 hours after subcutaneous injection and achieved approximately 0.2, 0.4, 1.0 and 1.3 anti-Xa IU/ml following single-subcutaneous administration of 20 mg, 40 mg, 1 mg/kg and 1.5 mg/kg doses respectively. Enoxaparin pharmacokinetics appears to be linear over the recommended dosage ranges. Intra-patient and inter-patient variability is low. After repeated subcutaneous administration of  40 mg once daily and 1.5 mg/kg once daily regimens in healthy volunteers, the steady-state is reached on day 2 with an average exposure ratio about 15 % higher than after a single dose. Steady-state enoxaparin activity levels are well predicted by single dose pharmacokinetics. After repeated subcutaneous administration of the 1 mg/kg twice daily regimen, the steady-state is reached from day 3 to 4 with mean exposure about 65 % higher than after a single dose and mean peak and trough levels of about 1.2 and 0.52 IU/ml, respectively. Based on enoxaparin sodium pharmacokinetics, this difference in steady state is expected and within the therapeutic range.

Distribution :
The volume of distribution of enoxaparin sodium anti-Xa activity is about 5 litres and is close to the blood volume.

Elimination and Metabolism :
Enoxaparin sodium is a low clearance drug with a mean anti-Xa plasma clearance of 0.74 L/h after a 1.5 mg/kg 6-hour intravenous infusion. Elimination appears monophasic with a half-life of about 4 hours after a single-subcutaneous dose to about 7 hours after repeated dosing. Enoxaparin sodium is primarily metabolised in the liver by desulfation and/or depolymerisation to lower molecular weight species with much reduced biological potency. Renal clearance of active fragments represents about 10 % of the administered dose and total renal excretion of active and non-active fragments 40 % of the dose.

Characteristics in Special Populations :
Elderly :
Based on the results of a population pharmacokinetic analysis, the enoxaparin sodium kinetic profile is not different in elderly subjects compared to younger subjects when renal function is normal. However, since renal function is known to decline with age, elderly patients may show reduced elimination of enoxaparin sodium.

Weight :
After repeated subcutaneous 1.5 mg/kg once daily dosing, mean AUC of anti-Xa activity is marginally higher at steady state in obese healthy volunteers (BMI 30-48 kg/m2) compared to non-obese control subjects, while Cmax is not increased. There is a lower weight-adjusted clearance in obese subjects with subcutaneous dosing. When non-weight adjusted dosing was administered, it was found after a single-subcutaneous 40 mg dose, that anti-Xa exposure is 50 % higher in low-weight women (< 45 kg) and 27 % higher in low-weight men (< 57 kg) when compared to normal weight control subjects.

INDICATIONS  :
ENOXOL is indicated for :

Administration :
Subcutaneous injection technique :
Patients should be lying down and ENOXOL administered by deep subcutaneous injection. Do not expel the air bubble from the syringe before the injection to avoid the loss of drug when using the 20 and 40 mg pre-filled syringes. Administration should be alternated between the left and right anterolateral or posterolateral abdominal wall. ENOXOL contains no antimicrobial agent and should be used only once and then discarded.

Pregnancy : Pregnancy Category C
Animal studies have not shown any evidence of foetotoxicity or teratogenicity. In the pregnant rat, the transfer of 35S-enoxaparin across the maternal placenta to the foetus is minimal. In humans, there is no evidence that enoxaparin crosses the placental barrier during the second trimester of pregnancy. There is no information available concerning the first and the third trimesters. As there are no adequate and well-controlled studies in pregnant women and because animal studies are not always predictive of human response, this drug should not be used in pregnant patients unless no safer alternative is available.

Lactation :
In lactating rats, the concentration of 35S-enoxaparin or its labelled metabolites in milk is very low. It is not known whether unchanged enoxaparin is excreted in human breast milk. The oral absorption of enoxaparin is unlikely. However, as a precaution, lactating mothers receiving enoxaparin should be advised to avoid breast-feeding.

INTERACTIONS  AND  INCOMPATIBILITIES :
Interactions :
It is recommended that agents which affect haemostasis should be discontinued prior to ENOXOL therapy unless strictly indicated. These agents include medications such as :

If the combination is indicated, ENOXOL should be used with careful clinical and laboratory monitoring when appropriate.

SIDE  EFFECTS :
As with other anticoagulants bleeding may occur during enoxaparin therapy in the presence of associated risk factors such as : organic lesions liable to bleed or the use of medications affecting haemostasis. The origin of the bleeding should be investigated and appropriate treatment instituted. Major haemorrhage including retroperitoneal and intracranial bleeding have been reported, in rare instances these have been fatal. Mild, transient, asymptomatic thrombocytopenia has been reported during the first days of therapy. Immuno-allergic thrombocytopenia, with or without thrombosis, has rarely been reported. Pain, haematoma and mild local irritation may follow the subcutaneous injection of enoxaparin. Rarely, hard inflammatory nodules which are not cystic enclosures of enoxaparin, have been observed at the injection site. They resolve after a few days and should not cause therapy discontinuation. Exceptional cases of skin necrosis at the injection site have been reported with heparins and low molecular weight heparins. These phenomena are usually preceded by purpura or erythematous plaques, infiltrated and painful. Enoxaparin must be discontinued.

OVERDOSAGE :
Accidental overdosage with ENOXOL after intravenous, extracorporeal or subcutaneous administration may lead to haemorrhagic complications. Following oral administration of even large doses, it is unlikely that ENOXOL will be absorbed.

TREATMENT  OF  OVERDOSAGE :
The anticoagulant effects can be largely neutralised by the slow intravenous injection of protamine. The dose of protamine depends on the dose of ENOXOL injected, 1 mg protamine neutralises the anticoagulant effect of 1 mg of ENOXOL, if ENOXOL was administered in the previous 8 hours. An infusion of 0.5 mg protamine per 1 mg of ENOXOL may be administered if ENOXOL was administered greater than 8 hours previously, or if it has been determined that a second dose of protamine is required. Protamine administration may not be required 12 hours after the ENOXOL injection. However, depending on the clinical circumstances, eg the size of the dose of ENOXOL, whether or not a therapeutic level of anticoagulation needs to be retained and whether or not the patient is actively bleeding, the administration of a reduced dose of protamine may not be advisable.

STORAGE :
Store below 30°C, protected from light.
Do not refrigerate.