BALCOBAL is Methylcobalamin (mecobalamin) preparation, a vitamin B12 of the coenzyme type existing in the blood and in the cerebrospinal fluid. This active ingredient is transported into the nervous tissues in a better manner than other types of vitamin B12. Chemically, Methylcobalamin is designated as Coa-[a-(5,6-Dimethylbenz-1H-imidazolyl)]-Cobmethylcobamide. The molecular formula is C63H91CoN13O14P and molecular weight is 1344.38. 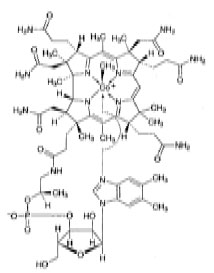 3. Mecobalamin promotes axonal transport and axonal regeneration :
Mecobalamin normalizes axonal skeletal protein transport in sciatic nerve cells from rat models with streptozotocininduced diabetes mellitus. It exhibits neuropathologically and electrophysiologically inhibitory effects on nerve degeneration in neuropathies induced by drugs, such as adriamycin, acrylamide, and vincristine (in rats and rabbits), models of axonal degeneration in mice and neuropathies in rats with spontaneous diabetes mellitus.

CLINICAL STUDIES :
To study the effects of the intravenous administration of mecobalamin, an analogue of vitamin B12, for uremic or uremic-diabetic polyneuropathy in patients who are receiving maintenance haemodialysis. An ultra-high dose of vitamin B12 has been reported to promote peripheral nerve regeneration in experimental neuropathy. 9 patients received a 500 mcg Mecobalamin injection 3 times a week for 6 months. The effects were evaluated using neuropathic pain grading and a nerve conduction study. Serum concentrations of vitamin B12 were ultra-high during treatment due to the lack of urinary excretion. After 6 months of treatment, the patients pain or paresthesia had lessened, and the ulnar motor and median sensory nerve conduction velocities showed significant improvement. There were no side effects. Intravenous mecobalamin treatment is a safe and potentially beneficial therapy for neuropathy in chronic haemodialysis patients.

To investigate the effect of mecobalamin on diabetic neuropathies 108 patients with non-insulin dependent diabetes mellitus were involved in a randomized positivecontrol clinical trial. 62 cases were treated with mecobalamin 500 mcg intramuscularly 3 times a week for 4 weeks then followed by 500 mcg orally 3 times a day for additional eight weeks. 46 cases were treated with vitamin B12 in the same way and served as controls. 12 weeks after the treatment, spontaneous pain and numbness of limbs were improved by 73 % and 75 % in the Mecobalamin group, which were much higher than those in the controls (36 % and 45 % respectively). Hypoesthesia, hotness, coldness, oral dryness and dysuria showed better response in the mecobalamin group than in the controls (55 % vs 25 %, 52 % vs 18 %, 59 % vs 30 %, 53 % vs 19 %, 63 % vs 20 % respectively). Mecobalamin also benefited nerve reflection and conduction velocity to a certain extent. No obvious side effects were found. Mecobalamin might be worthy of use as a safe agent in the treatment of diabetic neuropathies.

Peripheral Neuropathy :
The usual adult dosage is 1 ampoule, equivalent to methylcobalamin 500 mcg, administered via intramuscular or intravenous injection three times a week. Dosage should be adjusted in accordance with patient age and severity of the symptoms.

Megaloblastic Anaemia :
The usual adult dosage is 1 ampoule, equivalent to methylcobalamin 500 mcg, administered via intramuscular or intravenous injection three times a week. After two months of treatment as a maintenance therapy one ampoule every month to three months should be
administered.

General :
The medicine should not be used for months, if there is no response at all after its initial administration.

CONTRAINDICATIONS :
There are no known contraindications for BALCOBAL.

WARNINGS :
BALCOBAL contains benzyl alcohol as preservative. Benzyl alcohol has been reported to be associated with a fatal “Gasping Syndrome” in premature infants. Symptoms include a striking onset of gasping syndrome,hypotension, bradycardia and cardiovascular collapse.

PRECAUTIONS :
1. BALCOBAL is susceptible to modification through photolysis. Hence, it should be used promptly after opening the container, and care should be taken not to expose ampoules to direct sunlight.

2. In I.M. administration, care should be taken as suggested below, to avoid adverse effects on tissues or nerves.
a. Repeated injections in the same site should be avoided. Special care should be exercised when administering this drug to newborns, premature infants, infants and children.
b. The course of nerves shall be avoided for the site of injection.
c . If the patient complains of pain or if blood reflux occurs when the syringe needle is inserted, it is suggested to withdraw it immediately and try at a different site.

3. Anaphylactoid reaction such as decrease in blood pressure or dyspnea, may occur. Patients should be carefully observed. In the event of such symptoms, treatment should be discontinued immediately and appropriate measures taken.

No reports have been made on teratogenic effects of BALCOBAL, although the safe use during pregnancy has not been established either.

SIDE EFFECTS :
1. Hypersensitivity : Use of this product should be discontinued if symptoms of Hypersensitivity, such as rashes occur.
2. Others : Although infrequently, pain and hardening at the site of the I.M. injection may occur. Rarely, headache, sweating and feeling of warmth may also occur.

STORAGE :
Store below 25°C (77°F), protected from light.
Since the light decomposes the active ingredients.

SHELF LIFE :
36 months from the date of manufacture.