OLANZAPINE  TABLETS  USP (Olanzapine) is Antipsychotic. Chemically, Olanzapine is  2-Methyl-4-(4-methyl-1-piperazinyl)-10H-thieno[2,3-b][1,5] benzodiazepine. The molecular formula is C17H20N4S and molecular weight is 312.43. 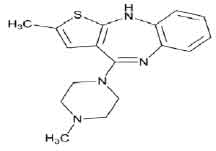 OLANZAPINE  TABLETS  USP is white coloured, round film coated tablet having break line on one side and other side plain.

ACTIONS :
The exact mechanism by which olanzapine exerts its antipsychotic effect is unknown. However, this effect may be mediated through a combination of dopamine and serotonin  5-HT2 antagonism. Olanzapine is a selective monoaminergic antagonist with a strong affinity for serotonin 5-HT2A and 5-HT2C receptors, and dopamine D1, D2, D3, and D4 receptors. Olanzapine binds weakly to gamma-aminobutyric acid type A (GABAA), benzodiazepine (BZD), and beta-adrenergic receptors. Olanzapine’s high affinity binding to, and antagonism of, muscarinic M1, M2, M3, M4, and M5 receptors may explain its anticholinergic effects. Olanzapine also binds with high affinity to histamine H1 and alpha1 -adrenergic receptors. Antagonism of histamine H1 and alpha1 -adrenergic receptors may be responsible for the occurrence of somnolence and orthostatic hypotension, respectively, seen with olanzapine use.

PHARMACOKINETICS :
Olanzapine is well absorbed from the gastrointestinal tract after oral doses but undergoes considerable first pass metabolism. Peak plasma concentrations are achieved about 5 to 8 hours after oral doses and about 15 to 45 minutes after an intramuscular dose. Olanzapine is about 93 % bound to plasma proteins. It is extensively metabolised in the liver, primarily by direct glucuronidation and by oxidation mediated through the cytochrome P450 isoenzymes CYP1A2, and, to a lesser extent, CYP2D6. The 2 major metabolites 10-N-glucuronide and 4’-N-desmethyl olanzapine appear to be inactive. About 57 % of a dose is excreted in the urine, mainly as metabolites, and about 30 % appears in the faeces. The mean plasma elimination half-life has been variously reported to be about 30 to 38 hours; half-lives tend to be longer in female than in male patients. Olanzapine is distributed into breast milk.

Dosage :
Adults
Schizophrenia : The recommended starting dose for olanzapine is 10 mg/day.
Manic episode : The starting dose is 15 mg as a single daily dose in monotherapy or 10 mg daily in combination therapy.
Preventing recurrence in bipolar disorder : The recommended starting dose is 10 mg/day. For patients who have been receiving olanzapine for treatment of manic episode, continue therapy for preventing recurrence at the same dose. If a new manic, mixed, or depressive episode occurs, olanzapine treatment should be continued (with dose optimisation as needed), with supplementary therapy to treat mood symptoms, as clinically indicated. During treatment for schizophrenia, manic episode, and recurrence prevention in bipolar disorder, daily dosage may subsequently be adjusted on the basis of individual clinical status within the range 5-20 mg/day. An increase to a dose greater than the recommended starting dose is advised only after appropriate clinical reassessment and should generally occur at intervals of not less than 24 hours. Gradual tapering of the dose should be considered when discontinuing OLANZAPINE  TABLETS  USP.

Paediatric population
OLANZAPINE  TABLETS  USP is not recommended for use in children and adolescents below 18 years of age due to a lack of data on safety and efficacy. A greater magnitude of weight gain, lipid and prolactin alterations has been reported in short term studies of adolescent patients than in studies of adult patients.

Gender
The starting dose and dose range need not be routinely altered for female patients relative to male patients.

Smokers
The starting dose and dose range need not be routinely altered for non-smokers relative to smokers. When more than one factor is present which might result in slower metabolism (female gender, geriatric age, non-smoking status), consideration should be given to decreasing the starting dose. Dose escalation, when indicated, should be conservative in such patients.

WARNINGS  AND  PRECAUTIONS :
During antipsychotic treatment, improvement in the patient’s clinical condition may take several days to some weeks. Patients should be closely monitored during this period. Dementia-related psychosis and/or behavioural disturbances OLANZAPINE  TABLETS  USP is not approved for the treatment of dementia-related psychosis and/or behavioural disturbances, and is not recommended for use in this particular group of patients because of an increase in mortality and the risk of cerebrovascular accident. In placebo-controlled clinical trials (6 -12 weeks duration) of elderly patients (mean age 78 years) with dementia-related psychosis and/or disturbed behaviours, there was a 2-fold increase in the incidence of death in olanzapine-treated patients compared to patients treated with placebo   (3.5 % versus 1.5 %, respectively). The higher incidence of death was not associated with olanzapine dose (mean daily dose 4.4 mg) or duration of treatment. Risk factors that may predispose this patient population to increased mortality include age  >65 years, dysphagia, sedation, malnutrition and dehydration, pulmonary conditions (e.g., pneumonia, with or without aspiration), or concomitant use of benzodiazepines. However, the incidence of death was higher in olanzapine-treated than in placebo-treated patients, independent of these risk factors. In the same clinical trials, cerebrovascular adverse events (CVAE, e.g. stroke, transient ischemic attack), including fatalities, were reported. There was a 3-fold increase in CVAE in patients treated with olanzapine compared to patients treated with placebo
(1.3 %  versus 0.4 %, respectively). All olanzapine - and placebo-treated patients who experienced a cerebrovascular event had pre-existing risk factors. Age >75 years and vascular/mixed type dementia were identified as risk factors for CVAE in association with olanzapine treatment. The efficacy of olanzapine was not established in these trials.

Parkinson’s disease
The use of OLANZAPINE  TABLETS  USP in the treatment of dopamine agonist associated psychosis in patients with Parkinson’s disease is not recommended. In clinical trials, worsening of Parkinsonian symptomatology and hallucinations were reported very commonly and more frequently than with placebo, and olanzapine was not more effective than placebo in the treatment of psychotic symptoms.

Hyperglycaemia and diabetes
Hyperglycaemia and/or development or exacerbation of diabetes, occasionally associated with ketoacidosis or coma, has been reported rarely, including some fatal cases. In some cases, a prior increase in body weight has been reported, which may be a predisposing factor. Appropriate clinical monitoring is advisable in accordance with utilised antipsychotic guidelines e.g. measuring of blood glucose at baseline, 12 weeks after starting olanzapine treatment and annually thereafter. Patients treated with any antipsychotic
medicinal products, including olanzapine, should be observed for signs and symptoms of hyperglycaemia (such as polydipsia, polyuria, polyphagia, and weakness) and patients with diabetes mellitus or with risk factors for diabetes mellitus should be monitored regularly
for worsening of glucose control. Weight should be monitored regularly, e.g. at baseline, 4, 8 and 12 weeks after starting olanzapine treatment and quarterly thereafter.

Lipid alterations
Undesirable alterations in lipids have been observed in OLANZAPINE  TABLETS  USP treated patients in placebo controlled clinical trials. Lipid alterations should be managed as clinically appropriate, particularly in dyslipidemic patients and in patients with risk factors
for the development of lipid disorders. Patients treated with any antipsychotic medicinal products, including olanzapine, should be monitored regularly for lipids in accordance with utilised antipsychotic guidelines, e.g. at baseline, 12 weeks after starting olanzapine treatment and every 5 years thereafter.

Anticholinergic activity
While olanzapine demonstrated anticholinergic activity in vitro, experience during the clinical trials revealed a low incidence of related events. However, as clinical experience with OLANZAPINE  TABLETS  USP in patients with concomitant illness is limited, caution is advised when prescribing for patients with prostatic hypertrophy, or paralytic ileus and related conditions.

Hepatic function
Transient, asymptomatic elevations of hepatic aminotransferases, alanine transferase (ALT), aspartate transferase (AST), have been seen commonly, especially in early treatment. Caution should be exercised and follow-up organized in patients with elevated ALT
and/or AST, in patients with signs and symptoms of hepatic impairment, in patients with pre-existing conditions associated with limited hepatic functional reserve, and in patients who are being treated with potentially hepatotoxic medicinal products. In cases where
hepatitis (including hepatocellular, cholestatic, or mixed liver injury) has been diagnosed, OLANZAPINE  TABLETS  USP treatment should be discontinued.

Discontinuation of treatment
Acute symptoms, such as sweating, insomnia, tremor, anxiety, nausea, or vomiting, have been reported very rarely (< 0.01 %) when olanzapine is stopped abruptly.

QT interval
In clinical trials, clinically meaningful QTc prolongations (Fridericia QT correction  [QTcF] ≥500 milliseconds [msec] at any time post-baseline in patients with  baseline QTcF < 500 msec) were uncommon (0.1 % to 1 %) in patients treated with OLANZAPINE TABLETS  USP, with no significant differences in associated cardiac events compared to placebo. However, as with other antipsychotics, caution should be exercised when OLANZAPINE  TABLETS  USP is prescribed with medicinal products known to increase QTc interval, especially in the elderly, in patients with congenital long QT syndrome, congestive heart failure, heart hypertrophy, hypokalaemia, or hypomagnesaemia.

Postural hypotension
Postural hypotension was infrequently observed in the elderly in OLANZAPINE  TABLETS  USP clinical trials. As with other antipsychotics, it is recommended that blood pressure is measured periodically in patients over 65 years.

Paediatric population
OLANZAPINE  TABLETS  USP is not indicated for use in the treatment of children and adolescents. Studies in patients aged 13 -17 years showed various adverse reactions, including weight gain, changes in metabolic parameters and increases in prolactin levels. Long-term outcomes associated with these events have not been studied and remain unknown. OLANZAPINE  TABLETS  USP should be used cautiously in diabetic patients.

Non-Teratogenic Effects :
Neonates exposed to olanzapine, during the third trimester of pregnancy are at risk for extrapyramidal and/or withdrawal symptoms following delivery. There have been reports of agitation, hypertonia, hypotonia, tremor, somnolence, respiratory distress and feeding disorder in these neonates. These complications have varied in severity; while in some cases symptoms have been self-limited, in other cases neonates have required intensive care unit support and prolonged hospitalization. Olanzapine should be used during pregnancy only if the potential benefit justifies the potential risk to the foetus.

Nursing mothers :
In a study in lactating, healthy women, olanzapine was excreted in breast milk. Mean infant dose at steady state was estimated to be 1.8 % of the maternal olanzapine dose. It is recommended that women receiving olanzapine should not breast-feed.

Paediatric Use :
Compared to patients from adult clinical trials, adolescents were likely to gain more weight, experience increased sedation, and have greater increases in total cholesterol, triglycerides, LDL cholesterol, prolactin and hepatic transaminase levels. When deciding among the alternative treatments available for adolescents, clinicians should consider the increased potential (in adolescents as compared with adults) for weight gain and hyperlipidaemia. Safety and effectiveness of olanzapine in children <13 years of age have not been established. Safety and effectiveness of olanzapine and fluoxetine in combination in children and adolescents <18 years of age have not been established.

TREATMENT  OF  OVERDOSAGE :
There is no specific antidote for olanzapine. Induction of emesis is not recommended. Standard procedures for management of overdose may be indicated (i.e. gastric lavage, administration of activated charcoal). The concomitant administration of activated charcoal was shown to reduce the oral bioavailability of olanzapine by 50 to 60 %. Symptomatic treatment and monitoring of vital organ function should be instituted according to clinical presentation, including treatment of hypotension and circulatory collapse and support of respiratory function. Do not use epinephrine, dopamine, or other sympathomimetic agents with beta-agonist activity, since beta stimulation may worsen hypotension. Cardiovascular monitoring is necessary to detect possible arrhythmias. Close medical supervision and monitoring should continue until the patient recovers.

STORAGE :
Store below 30ºC (86ºF), protected from moisture and light.
Do not refrigerate.